Sandstone lakeshore cliff consists of vertical or near-vertical exposures of bedrock with sparse coverage of vascular plants, lichens, mosses, and liverworts. The community occurs primarily in the central and western Upper Peninsula along Lake Superior but also is found along a short stretch of shore along Lake Huron in the thumb region. Sandstone lakeshore cliffs range from 2 to 65 m (6 to 200 ft) high and are characterized by high site moisture due to the proximity to the Great Lakes and a stressed and unstable environment because of severe waves, wind, and winter ice. 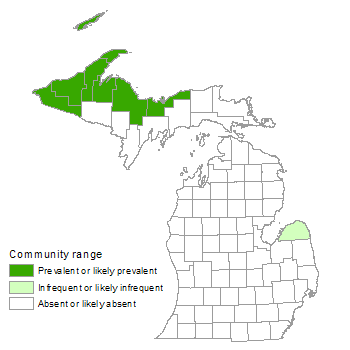 Sandstone cliffs occur primarily along the shores of Lake Superior as part of the Copper Harbor Conglomerate, Jacobsville Sandstone, and Nonesuch and Freda Formations, stretching from the Wisconsin-Michigan boundary in the west to east of Munising in Pictured Rocks National Lakeshore. There are over 24 km (15 miles) of cliff in the Porcupine Mountains, 10 km (6 miles) near Point Abbaye, 11 km (7 miles) in the Huron Mountain Club, and over 29 km (18 miles) at the Pictured Rocks National Lakeshore and Grand Island. In all, about 128 km (80 miles) of sandstone lakeshore cliff occur along Lake Superior, and another 0.5 miles of cliff composed of Marshall Sandstone occurs at Pointe Aux Barques on southern Lake Huron. Cliffs range from 2 to 65 m (6 to 200 ft) high, with the highest cliffs at the Pictured Rocks National Lakeshore. Similar sandstone cliffs occur along the Wisconsin shoreline of Lake Superior. In Michigan, sandstone lakeshore cliff is typically bordered along its inland margin by boreal forest, dry-mesic northern forest, mesic northern forest, and occasionally by forested wetlands. Along the shoreline, sandstone lakeshore cliffs are interspersed with areas of sandstone bedrock lakeshore, sandstone cobble shore, volcanic lakeshore cliff, volcanic bedrock lakeshore, volcanic cobble shore, granite bedrock lakeshore, granite bedrock cliff, and sand and gravel beach.

There is almost no soil development on the cliffs except for shallow organic soil development along the narrow cliff summit and ledges, in crevices in the cliff face, and at the base of the cliff where sand particles, decaying roots, and plant debris accumulate. The breakdown of sandstone and plant matter results in an acidic, sandy, organic-rich soil.

The vertical structure of cliffs causes constant erosion and restricts soil development to the cliff edge, ledges, crevices, and the base of the cliff where organic matter and sandy particles can accumulate. The thin soils and direct exposure to wind, ice, and sun produce desiccating conditions that limit plant growth. However, cliff aspect and local seepages result in a variability of site moisture conditions. North- and east-facing cliffs are typically moister than south- and west-facing cliffs because of reduced wind and reduced direct exposure to the sun. Moisture can be locally present on cliff faces due to local groundwater seepages along the cliff face and surface flow across the cliff during rain events or snow melt. In addition, fog occurs regularly on the coast, fostering the growth of moss and lichen. Windthrown trees are common along the tops of cliffs due to strong lake winds and shallow soils. Windblown trees at the base of the cliff provide localized areas for soil accumulation. Sandstone cliff faces regularly break free, forming blocky talus at the base of many of the sandstone cliffs and exposing fresh, bare rock substrates. Cliff faces are scoured by ice and waves, further increasing rates of erosion.

Many of the Jacobsville Sandstone sites have blocky talus at the base of the cliffs, while talus is absent on most Freda Sandstone sites. The talus supports almost no vegetation, probably due to frequent inundation and severe storm waves. The cliff face is largely unvegetated, except within cracks, on ledges, and where there are seepages or small streams crossing the rock surface. In these moist areas mosses, lichens, and grasses often form thick vegetation beds. The density and diversity of the vegetation of sandstone lakeshore cliffs tend to be greater along lower escarpments. The tops of the cliffs are typically boreal forest but can include dry-mesic northern forest, mesic northern forest, and less frequently forested wetland.

The sandstone bedrock along Lake Superior varies significantly in texture and erosion resistance, which influence vegetative composition and structure. Some of the sandstone cliffs grade into much finer siltstone.

For a full list of references used to create this description, please refer to the natural community abstract for Sandstone Lakeshore Cliff.