Granite lakeshore cliff consists of vertical or near-vertical exposures of bedrock with sparse coverage of vascular plants, lichens, mosses, and liverworts. The community occurs in the western Upper Peninsula along Lake Superior and is characterized by high site moisture due to its proximity to Lake Superior and a stressed and unstable environment because of severe waves, wind, and winter ice. 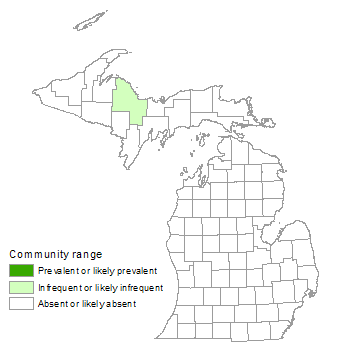 A broad range of igneous and metamorphic rock, including gneiss, schist, granite, and quartzite, are often loosely referred to as “granitic” or “granite.” Along Lake Superior in the western Upper Peninsula, small exposed knobs of the older granitic bedrock are typically surrounded by long expanses of younger, more recently formed Jacobsville Sandstone cliffs. In Michigan, scattered exposures of granitic cliffs are limited to a 80 km (50 mile) stretch of the Lake Superior shoreline in Marquette County from the Huron Islands in the west to just east of Marquette. The community is also present along the Minnesota and Ontario shorelines of Lake Superior. Along its inland margin, granite lakeshore cliff is typically bordered by boreal forest, dry-mesic northern forest, mesic northern forest, or granite bedrock glade. Along the shoreline, the community is interspersed with areas of granite bedrock lakeshore, sandstone lakeshore cliff, volcanic cobble shore, and sand and gravel beach.

Soil development is limited to organic soils that form from decaying roots and other plant material that accumulates in cracks, crevices, and depressions in the bedrock, primarily along the cliff summit. The thin organic soils are acidic.

The combination of strong winds, waves, ice, and bedrock exfoliation maintain open conditions on the cliff face. The thin soils and full exposure to wind, ice, and sun produce desiccating conditions for many plants. Abundant fog provides moisture for the establishment of mosses and lichens on more protected rock surfaces, while vascular plants are restricted to crevices or moisture-holding depressions in the rock. Granitic rock, formed under intense pressure deep within the earth’s crust, exfoliates when it is exposed at the surface. Exfoliation adds to the instability of the ecosystem, reducing dependable habitat for plant establishment. As portions of the bedrock slough off, they form talus slopes along the shore at the base of the cliff (if a ledge is present at the cliff base) and expose fresh, bare rock substrates.

While mosses and lichens can be common on the exposed cliff face, vascular plant cover is sparse, being generally restricted to the flat, exposed bedrock at the upper edge of the cliff (i.e., lip), cracks and crevices in the cliff face, and along the cliff base if a ledge of talus, cobble, sand, or bedrock is present between the cliff and the open water. At the upper edge of the cliff, there are often krummholz (i.e., low, misshapen) or flagged white pine (Pinus strobus), jack pine (P. banksiana), and red pine (P. resinosa). Paper birch (Betula papyrifera), quaking aspen (Populus tremuloides), and serviceberries (Amelanchier spp.) also occur in this zone. Characteristic shrubs include low sweet blueberry (Vaccinium angustifolium), bearberry (Arctostaphylos uva-ursi), common juniper (Juniperus communis), and bush honeysuckle (Diervilla lonicera). Among the more common plants of the sparse ground layer are hair grass (Avenella flexuosa), poverty grass (Danthonia spicata), three-toothed cinquefoil (Sibbaldiopsis tridentata), and large-leaved aster (Eurybia macrophylla). The top of the cliff is often an open glade, with scattered, open-grown, flagged trees growing on bedrock or thin soil. Fissures along the cliff face and ledges can support scattered clumps of vegetation. Typical species include grass-leaved goldenrod (Euthamia graminifolia), hair grass, bearberry, common juniper, serviceberries, and stunted white pine and paper birch.

Several types of bedrock are included within this plant community. On Lake Superior in Michigan, this includes granites, gneisses, quartzite, and probably several other types of metamorphic rock.