Sandstone cobble shore is a sparsely vegetated community that occupies the edges of Lake Superior, predominantly occurring in coves and gently curving bays in association with bedrock cliff, bedrock outcrop, sandstone bedrock lakeshore, and sand and gravel beach. These cobble shores may be nearly level and support a diversity of herbaceous plants where they border sand and gravel beach or relatively steep and terraced in coves between bedrock outcrops, with vegetation mostly limited to the highest cobble beach ridge, where scattered trees and shrubs are dominant. Sandstone cobble shore is dominated by flat, round-sided sandstones that move readily when subject to intense wave action, limiting soil development and vegetation establishment. 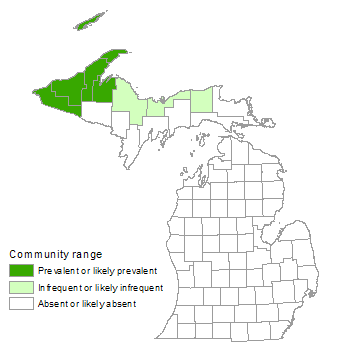 Sandstone cobble shore occurs along the edges of Lake Superior as part of the Copper Harbor Conglomerate, Jacobsville Sandstone, and Nonesuch and Freda Formations. This type of cobble shore includes a combination of siltstones and shales in addition to sandstones, and is found along the shores of Lake Superior in the United States and Canada, including Michigan, Minnesota, Wisconsin, and Ontario. In Michigan, sandstone cobble shore occurs at the east end of Pictured Rocks National Lakeshore, along the Keweenaw Peninsula and Point Abbaye, and within and near Porcupine Mountains Wilderness State Park.

Little or no soil development occurs on sandstone cobble shore. The few plants that establish are rooted in sand and gravel deposits under the coarse cobble. The size of the weathered and eroded sandstone cobbles ranges from 2 to 3 cm (0.75 to 1.0 in) in diameter to over 20 cm (8 in) in diameter, and large sandstone and conglomerate boulders or slabs can be common.

Storm waves, ice scour, and desiccation are the primary forms of natural disturbance. The flat-sided sandstones are easily moved and rearranged by storm waves and ice movement, which form and remove terraces, uproot and bury plants, and limit soil development. In addition to a lack of soil, plant establishment in deep cobble is limited by desiccating conditions during summer droughts as a result of full exposure to sun and wind. Groundwater seepage, storm waves, and streams, both perennial and intermittent, provide a source of moisture for vegetation in some areas of the community. Windthrow is common along the inland forested edge due to strong winds associated with Lake Superior storms.

Community structure and species composition are strongly influenced by the sizes and types of cobble, steepness of shoreline slope, and presence or absence of terracing, groundwater seepage, and streams. Geological differences in sandstone bedrock along Lake Superior cause variability in cobble texture and erosion resistance, which in turn influences soil development and vegetation establishment. Sandstone cobble shore also includes cobbles formed from finer siltstone and shale. Siltstones occur along the west shore of the Keweenaw Peninsula, and small exposures of shale occur farther west along the Porcupine Mountains’ shoreline. Low shale ledges are also present along the southwestern shoreline of Lake Huron, but no well developed cobble shores are known from this area.