Volcanic lakeshore cliffs consist of vertical or near-vertical exposures of bedrock, which support less than 25% vascular plant coverage, although lichens, mosses, and liverworts are abundant on some rock surfaces. The cliffs range in height from 3 to 80 meters (10 to 260 ft) and occur on Lake Superior along the Keweenaw Bay shoreline of the Keweenaw Peninsula and along the northern shoreline of Isle Royale. Volcanic lakeshore cliffs are characterized by high site moisture due to the proximity to Lake Superior and a stressed and unstable environment because of severe waves, wind, and winter ice. 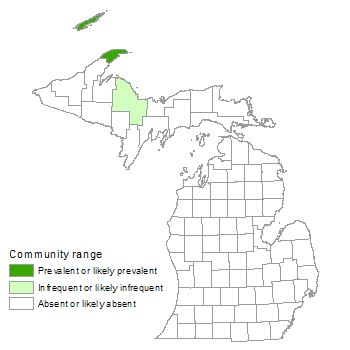 The bedrock of the Keweenaw Peninsula dips steeply toward the north and into Lake Superior, while the south face of the bedrock forms cliffs. In most places, the cliffs are only a few meters high, but near Bete Grise the cliffs are nearly 80 m (260 ft) high. Cliffs occur along large stretches of the 32 km (20 mile)-long southern shoreline of the Keweenaw Peninsula and Manitou Island between Bete Grise to the Manitou Island lighthouse at the east end of the island. Volcanic rock cliffs similarly form the north shoreline of Isle Royale. On the Keweenaw Peninsula, most of the cliffs are formed of massive basalt, but there are also some areas of cliff composed of volcanic conglomerate rock. Volcanic lakeshore cliff also occurs on the shorelines of Lake Superior in Ontario and Minnesota. In Michigan, volcanic lakeshore cliff is typically bordered by boreal forest and occasionally by dry-mesic northern forest, mesic northern forest, or volcanic bedrock glade. Along the shoreline, volcanic lakeshore cliffs are interspersed with areas of volcanic bedrock lakeshore, volcanic cobble shore, and sand and gravel beach.

The cliffs are exposed to almost continual wave action from Lake Superior. During winter, ice adds to the erosive environment along the shore, both for the cliff and the upland forest along the cliff edge. Storm winds off Lake Superior uproot trees and erode soils. Windblown trees at the base of the cliff provide localized areas for soil accumulation. Thin soils, winter winds, full exposure, and summer droughts produce a desiccating environment for plants. The regularly occurring fog along the coast serves to somewhat mitigate these desiccating effects during the growing season.

Volcanic lakeshore cliffs occur on both volcanic conglomerate and massive basalt. Vegetation diversity appears to be higher on the conglomerate substrate.