Limestone cliff consists of vertical or near-vertical exposures of bedrock, which typically support less than 25% vascular plant coverage, although some rock surfaces can be densely covered with lichens, mosses, and liverworts. The community occurs predominantly in the Upper Peninsula, most typically within a few kilometers of the Lake Michigan and Lake Huron shorelines, on the Niagaran Escarpment and Cuestra, but with isolated occurrences of much older Precambrian-aged limestones and dolomites in the western Upper Peninsula. Limestone cliffs also occur within sinkholes within Devonian Limestone in the northern Lower Peninsula. Like most of Michigan’s cliffs, vegetation cover is sparse, but abundant cracks and crevices combined with calcareous conditions result in greater plant diversity and coverage than on most other cliff types. 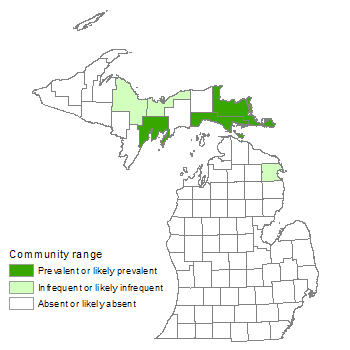 Limestone and dolomite cliffs are scattered along the Niagaran Escarpment, from the Garden Peninsula on northwestern Lake Michigan to Mackinac and Drummond Islands in northern Lake Huron. On the Niagaran Escarpment, limestone cliffs extend southwest onto the Door Peninsula of Wisconsin and east to the Bruce Peninsula in Ontario, and farther east into New York. In the western Upper Peninsula, limestone cliffs are quite localized in Houghton County west of L’Anse and south of Marquette in Marquette County. Karst features, such as sinkholes, occur in the Devonian-aged limestone of Presque Isle and Alpena counties, and there are small cliffs near the Lake Huron shoreline in both counties as well. Limestone cliffs also occur in Vermont and New Hampshire. In the Upper Peninsula of Michigan, limestone cliff is typically bordered along its margins by boreal forest, mesic northern forest, or occasionally by dry-mesic northern forest.

Soil development is primarily limited to thin organic soils that form from decaying roots and other plant materials along the top of the cliff escarpment and ledges, in cracks and crevices in the bedrock, and at the base of the cliff. Breakdown of limestone and plant debris results in a sandy to loamy, organic-rich soil, with mildly alkaline to alkaline pH.

The vertical structure of cliffs causes constant erosion and restricts soil development to the cliff edge, cracks, ledges, and the base of the cliff where organic matter and soil particles can accumulate. The thin soils and direct exposure to wind, ice, and sun produce desiccating conditions that limit plant growth. However, cliff aspect and local seepages result in a variability of site moisture conditions. North- and east-facing cliffs are typically moister than south- and west-facing cliffs because of reduced wind and reduced direct exposure to the sun. Moisture can be locally present on cliff faces due to local groundwater seepage along the cliff face or surface flow across the cliff face during rain events or snow melt. In addition, where limestone cliff occurs close to the Great Lakes, a moderated climate generates moist conditions along the cliff face. Weathering results in the gradual exfoliation of limestone along the cliff face, which adds to the instability of the ecosystem, reducing dependable habitat for plant establishment. As portions of the bedrock slough off, they form talus slopes along the base of cliffs and expose fresh, bare rock substrates along the cliff face. Windthrow of canopy trees along the cliff escarpment is common due to the thin soils, unstable substrate, and high wind activity. Windblown trees along ledges and at the base of the cliff provide localized areas for soil accumulation.

Studies of limestone cliffs in Ontario found that there were three distinct zones of vegetation that share few species: ridge-top forest, cliff face, and talus. This zonation is also apparent in many Michigan limestone cliff systems; however, where the vertical height of the cliffs is low, there is a significant amount of overlap in terms of species composition among the zones.

Threats to cliffs include logging of adjacent uplands and associated soil erosion, excessive foot traffic along the upper edge, rock climbing, and invasive plants. The thin soils and unstable cliff environment make soil development and plant reestablishment slow, highlighting the importance of minimizing logging and excessive trampling along the upper edge of cliffs. Rock climbing can result in damage and loss of vegetation on cliff faces, as many lichens and mosses of the cliffs have extremely slow recovery rates. Maintaining a mature, unfragmented forested buffer around limestone cliff may help limit the local seed source for invasive species distributed by wind or birds. Some of the invasive plants that may threaten diversity and structure of limestone cliffs include spotted knapweed (Centaurea stoebe), chickweed, ox-eye daisy, Canada bluegrass (Poa compressa), Kentucky bluegrass (P. pratensis), sheep sorrel (Rumex acetosella), hawkweeds (Hieracium spp.), common mullein, hound’s-tongue, and bittersweet nightshade. Monitoring and control efforts to detect and remove these and other invasive species will help maintain the ecological integrity of limestone cliff and surrounding natural communities.

The limestone is quite variable across the Niagaran Escarpment, including magnesium-rich limestone (i.e., dolomite) and argillaceous, or muddy limestone. These chemical differences result in different physical appearance and characteristics, such as hardness and amount and size of crevices. These physical and chemical differences translate to different habitat characteristics and species composition.