Granite cliff consists of vertical or near-vertical exposures of bedrock with sparse coverage of vascular plants, lichens, mosses, and liverworts. The community occurs in several counties of the western Upper Peninsula, including Dickinson, Gogebic, Houghton, Iron, Marquette, and Menominee. 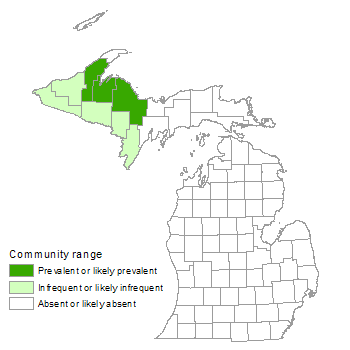 A broad range of igneous and metamorphic rock, including gneiss, schist, granite, and quartzite, are often loosely referred to as “granitic” or “granite.” Granite cliff is composed of resistant igneous and metamorphic bedrock types of the Michigamme Highlands that formed during the Precambrian Era, approximately 3,500 to 600 million years ago. The community is also present in nearby Wisconsin, Minnesota, and Ontario. Along its margins, granite cliff is typically bordered by boreal forest, dry-mesic northern forest, mesic northern forest, or granite bedrock glade. Wetlands sometimes occur at the base of cliffs and include rich conifer swamp, poor conifer swamp, and northern shrub thicket. Cliff exposures that occur along Lake Superior are classified as granite lakeshore cliff. Among the largest expanses of inland cliffs is Mulligan Cliffs in Marquette County, which is several miles long and ranges in height from 22 to 46 m (60 to 130 feet).

Soil development is limited to shallow organic soils that form from decaying roots and other plant material that accumulates in cracks, crevices, ledges, and flat areas or depressions in the bedrock. Soils accumulate primarily along the cliff summit, on talus slopes, and at the base of the cliff. The thin organic soils are typically acid but can range from slightly acid to slightly alkaline depending on the rock type.

The combination of vertical exposure, thin soils, strong winds, ice, and bedrock exfoliation maintain open conditions on the cliff face. The thin soils and full exposure to wind and sun produce desiccating conditions for many plants. Mosses and lichens establish on more protected rock surfaces, while vascular plants are restricted to crevices, ledges, or moisture-holding depressions in the rock. Granitic rock, formed under intense pressure deep within the earth’s crust, exfoliates when it is exposed at the surface. Exfoliation adds to the instability of the ecosystem, reducing dependable habitat for plant establishment. As portions of the bedrock slough off, they form talus slopes along the base of cliffs and expose fresh, bare rock substrates along the cliff face. Windthrow of canopy trees along the cliff escarpment is common due to the thin soils, unstable substrate, and high wind activity. Windblown trees along ledges and at the base of the cliff provide localized areas for soil accumulation. In addition, lightning strikes can generate localized fires along the cliff face and also at the base of the cliff where conifer canopy is most prevalent.

Areas of talus slope, concentrated at the base of the cliff, are characterized by sparse vegetation as well with scattered and stunted trees and tall shrubs including northern white-cedar, paper birch, white pine, white spruce (Picea glauca), balsam fir (Abies balsamea), quaking aspen (Populus tremuloides), choke cherry (Prunus virginiana), and serviceberries. The low shrub layer is often the most dense stratum in this zone, particularly in areas of high slope near the base of the cliff face. Dominant species of the low shrub layer and ground cover include stunted choke cherry, bush honeysuckle, thimbleberry (Rubus parviflorus), poison ivy (Toxicodendron radicans), and common polypody. Areas of extensive or recent rock slide are often devoid of vegetation except for lichens encrusted on boulders.

Threats to cliffs include logging of adjacent uplands and associated soil erosion, excessive foot traffic along the upper edge, rock climbing, and invasive plants. The thin soils and unstable environment make soil development and plant reestablishment slow, highlighting the importance of minimizing logging and excessive trampling along the upper edge of cliffs. Maintaining a mature, unfragmented forested buffer around granite cliff may help limit the local seed source for invasive species distributed by wind or birds. Some of the invasive plants that may threaten the biodiversity of granite cliffs include spotted knapweed (Centaurea stoebe), ox-eye daisy (Leucanthemum vulgare), Canada bluegrass (Poa compressa), Kentucky bluegrass (P. pratensis), sheep sorrel (Rumex acetosella), and hawkweeds (Hieracium spp.). Monitoring and control efforts to detect and remove these and other invasive species will help maintain the ecological integrity of granite cliff and surrounding natural communities.

Several types of bedrock are included within this plant community in Michigan, including granite, gneiss, quartzite, and probably several other types of metamorphic rock.