Northern fen is a sedge- and rush-dominated wetland occurring on neutral to moderately alkaline saturated peat and/or marl influenced by groundwater rich in calcium and magnesium carbonates. The community occurs north of the climatic tension zone and is found primarily where calcareous bedrock underlies a thin mantle of glacial drift on flat areas or shallow depressions of glacial outwash and glacial lakeplains and also in kettle depressions on pitted outwash and moraines. 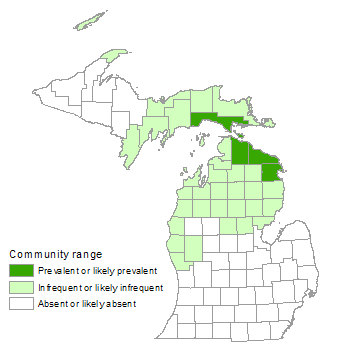 Northern fens occur on flat areas or shallow depressions of glacial outwash and glacial lakeplains, often in close proximity to the Great Lakes shoreline, and also in kettle depressions on pitted outwash and moraines. Within outwash channels, fens are typically found where a constant flow of cold, calcareous groundwater seeps from the base of adjacent moraines. The overall topography of fens is flat to gently undulating with microtopography characterized by hummocks and hollows. Within kettle depressions, fens can occupy the entire basin or frequently occur as a floating mat on the margin of the remaining glacial lake. Fens occurring on former glacial lakebeds and drainageways tend to be more extensive than kettle fens, which are limited in area by the size of the glacial ice-block that formed the basin. Northern fens occurring on glacial outwash and glacial lakeplains occur on sapric to fibric peat or marly flats overlaying calcareous bedrock, typically dolomite or limestone of Devonian age. Northern fens often occur within large wetland complexes, where they grade into other peatland communities such as poor fen, northern wet meadow, northern shrub thicket, and rich conifer swamp.

The organic soils of northern fens are composed of peat and/or marl, which are typically one to three meters deep. The surface peats may range from sapric to fibric, and like the surface water, are neutral to alkaline and characterized by high cation availability. Northern fens are minerotrophic peatlands, receiving constant inputs of cold groundwater that is rich in calcium and magnesium carbonates from having moved over or percolated through base-rich bedrock or calcareous glacial deposits. Because groundwater is the primary source of water input, the hydro-period of fens is relatively stable; the soils remain saturated throughout the year but are seldom inundated by more than a few centimeters of water. Northern fens often contain or develop on extensive areas of marl, a grayish, mineral substrate with a smooth, silty texture that develops when metabolism by algae results in precipitation of calcium carbonate. Areas containing marl deposits such as old glacial lakebeds are level and referred to as marl flats. Shallow water supporting populations of marl-producing algae commonly overlays marl flats. Dispersed throughout extensive areas of marl flats are low peat mounds or islands that support a continuous carpet of sphagnum mosses and a full complement of bog and poor conifer swamp species. The pH of peat islands is extremely acidic as a result of the reducing effect of sphagnum mosses and raised elevation above the underlying calcareous groundwater.

Saturated and inundated conditions inhibit organic matter decomposition and allow for the accumulation of peat. Development and expansion of fens occur via two different processes in glacial lakeplain and outwash versus kettle depressions. Fens develop in glacial lakeplain and outwash where groundwater influence maintains the saturated conditions that inhibit organic matter decomposition and allows for peat accumulation. Peat develops vertically and spreads horizontally. Lake-filling occurs in small kettle lakes with minimal wave action where gradual peat accumulation results in the development of a sedge mat that can fill the basin or occur as a floating mat within the lake or as a grounded mat along the water’s edge. Floating mats of fen sedges such as wiregrass sedge (Carex lasiocarpa) are able to pioneer open water and emergent marsh. The interlacing of rhizomes and roots forms a floating mat that is buoyed by water and accumulates organic matter in the form of sapric peat. Over time, fen mats are often invaded by ericaceous shrubs and acidifying sphagnum mosses. The invasion of sphagnum mosses into fen systems often results in the conversion of fens to more acidic communities such as poor fen or bog.

Extensive marl flats form through accumulation of marl on the bottom of hardwater lakes or former shallow embayments of the Great Lakes. Marl can build up and fill entire lake basins and shallow embayments, eventually becoming sparsely vegetated by a unique suite of species able to survive in alkaline conditions.

Natural disturbance factors influencing northern fens include constant saturation by cold, calcareous groundwater, fire, flooding, windthrow, and outbreaks of tree parasites and insects. Open conditions within fens are maintained primarily by hydrologic and chemical conditions that limit the establishment and growth of woody plants. Surface fires can contribute to the maintenance of fens by killing encroaching trees and shrubs without removing the peat, which is normally saturated. In the absence of fire, a thick layer of leaf litter can develop, which stifles seed bank expression and seedling establishment. Fire severity and frequency in fens is closely related to fluctuations in water level and landscape context; fens bordering fire-prone pine and oak-pine systems likely experienced occasional fires, whereas those embedded within rich conifer swamps or mesic northern forests burned very infrequently. Prolonged periods of lowered water table can allow the surface peat to dry out sufficiently to burn. Such peat fires can result in the conversion of peatland to mineral soil wetland. Lowering of the water table of fens results in the increase in decomposition rates of organic matter and the subsequent accumulation of compact peat that is more conducive to shrub and tree growth. In such a circumstance, northern fen can succeed to rich conifer swamp or northern shrub thicket. Flooding, often caused by beaver activity, can contribute to the maintenance of fens or result in the conversion of fens to bogs. Roots of trees in peatlands are physiologically active near the surface and are killed during prolonged flooding. Trees growing in fens are particularly susceptible to windthrow because peat provides a poor substrate for anchoring trees. Tree survival in fens is also limited by insects and parasites. Insect outbreaks of the larch sawfly (Pristiphora erichsonii) and larch casebearer (Coleophora laricella) cause heavy mortality of tamarack (Larix laricina), while the plant parasite dwarf mistletoe (Arceuthobium pusillum) kills black spruce (Picea mariana).

Northern fens provide important habitat for small mammals such as short-tailed shrew (Blarina brevicauda), beaver (Castor canadensis), meadow vole (Microtus pennsylvanicus), mink (Mustela vison), muskrat (Ondatra zibethicus), and masked shrew (Sorex cinereus). Both muskrats and beaver can profoundly influence the hydrology of peatlands. Muskrats create open water channels through the peat, and beavers can cause substantial flooding through their dam-building activities. Beaver dams can cause blocked drainage in fens and the subsequent succession of fens to bogs. Numerous butterflies and moths are restricted to bogs and fens because their food plants occur within these peatlands. In addition, many tiny land snails are associated with calcareous fens.

The primary mechanism for preserving fens is to maintain their hydrology, as slight changes in water chemistry or hydrology result in significant shifts in vegetation. Reduction of access to peatland systems will help decrease detrimental impacts caused by off-road vehicles (ORVs). Increased surface flow and reduction in groundwater recharge can be prevented by establishing no-cut buffers around fens and avoiding road construction and complete canopy removal in stands immediately adjacent to fens. In addition, road construction through fen should be avoided to prevent hydrologic alterations; roads can impede surface flows and result in complete changes in species composition and structure as a result of sustained flooding on one side of a road while the other side becomes drier and subject to increased shrub and tree encroachment. Where shrub and tree encroachment threatens to convert open wetlands to shrub-dominated systems or forested swamps, prescribed fire or selective cutting can be employed to maintain open conditions. Silvicultural management of fens to preserve open canopy should be employed during the winter to minimize damage to organic soils and impacts to the hydrologic regime.

Currently, fens are threatened by peat mining, logging, quarrying, agricultural runoff and nutrient enrichment, ORV activity, draining, and flooding. In addition to direct impacts to vegetation, alteration of peatland hydrology from road building, ORVs, quarrying, creation of drainage ditches and dams, and sedimentation and runoff from logging of surrounding uplands has led to significant changes in peatland vegetation composition and structure, as fen vegetation is extremely sensitive to minor hydrologic and chemical changes. Conversion to more eutrophic wetlands has occurred as the result of nutrient enrichment and raised water levels. Eutrophication favors establishment of invasive species. Lower water tables from drainage facilitate tree and shrub encroachment, followed by decreased species richness. In addition, lowering the water table can reduce marl accumulation and thus cause loss of rare calciphilic vegetation.

Species composition of northern fens varies depending on gradients in nutrient levels and water chemistry. The degree of minerotrophy of a given fen and within a fen depends on a variety of factors including the kind and amount of groundwater discharge; degree of dilution from precipitation; the characteristics of the bedrock and/or glacial deposits the groundwater has percolated through (i.e., older glacial sediments have less dissolved minerals due to prior leaching); the distance the water has traveled through the peatland; the thickness and character of the peat; and the presence or absence of marl.

Northern fens are strongly influenced by regional geomorphology. Fens occurring on former glacial lakebeds and drainageways tend to be more extensive than kettle fens, which are limited in area by the size of the glacial ice-block that formed the basin.

For a full list of references used to create this description, please refer to the natural community abstract for Northern Fen.