Rich conifer swamp is a groundwater-influenced, minerotrophic, forested wetland dominated by northern white-cedar (Thuja occidentalis) that occurs on organic soils (i.e., peat) primarily north of the climatic tension zone in the northern Lower and Upper Peninsulas. The community is also referred to as cedar swamp. 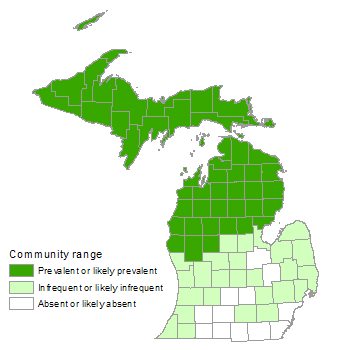 Rich conifer swamp occurs in outwash channels, outwash plains, glacial lakeplains, and in depressions on coarse- to medium-textured ground moraines. It is common in outwash channels of drumlin fields and where groundwater seeps occur at the bases of moraines. Rich conifer swamp typically occurs in association with lakes and cold, groundwater-fed streams. It also occurs along the Great Lakes shoreline in old abandoned embayments and in swales between former beach ridges where it may be part of a wooded dune and swale complex.

Climatic conditions in the community are influenced by its northerly distribution, low topographic position, and thick layer of mosses, especially sphagnum (Sphagnum spp.), which insulate the organic soils. At night, cold air drains down from the surroundings uplands throughout the growing season, causing condensation to collect on plants. This constant source of nocturnal moisture helps sustain the community’s abundant lichen and bryophyte flora. The cold air drainage may also cause nighttime temperatures to drop below freezing throughout the growing season. The insulating properties of sphagnum moss allow ice to remain within the upper layers of soil until mid-June or July, but in the fall, soils remain unfrozen until after snowfall, and deep penetration of frost may not occur until February. Thus, rich conifer swamp has a shorter, cooler, and more humid growing season than the surrounding uplands, while winters are milder and more even in temperature.

The soils are composed of saturated, coarse woody peat and may vary significantly in depth of organic matter. The organic soils are typically neutral to moderately alkaline but may be very strongly acid near the surface where sphagnum mosses dominate the ground layer. The structure and species composition of rich conifer swamp are strongly influenced by the constant flow of mineral-rich, cold groundwater through the organic soils.

Due to anaerobic conditions associated with a high water table and organic soils, trees growing in rich conifer swamps are shallowly rooted, making them susceptible to frequent small-scale windthrow. As a result, leaning, bent, or fallen trees are common, creating tip-up mounds, abandoned root pits, and coarse woody debris that contribute to the complex structure and microtopography of rich conifer swamp. Northern white-cedar is well adapted to windthrow because of its ability to reproduce both sexually, through seed, and asexually, by growing adventitious roots when its lateral branches are in contact with the ground (i.e., layering).

Fire may spread through the community during extensive periods of drought, killing many woody plants and in some instances, removing the upper layers of organic soil. Fire can also play a role in the community’s establishment. Seedlings of northern white-cedar can establish directly on burned-over organic soils or within alder thickets that originate following catastrophic fire in poor conifer swamp. Catastrophic fire and windfall in northern Lower Michigan conifer swamps are estimated to have occurred at intervals of approximately 3,000 years.

Rich conifer swamps provide critical winter habitat for deer and snowshoe hare. Beaver-induced flooding can result in widespread mortality of northern white-cedar and other species not adapted to prolonged flooding.

Rich conifer swamp is a self-maintaining, stable community that relies on gap-phase dynamics to regenerate long-lived, shade-tolerant, northern white-cedar. A major threat to natural regeneration of cedar in northern rich conifer swamps is high density of deer, which rely on cedar as a main winter-staple. Logging rich conifer swamps can facilitate its conversion to hardwood-conifer swamps, hardwood swamps, aspen, and alder thickets. Long-term conservation of rich conifer swamps will require reducing deer densities across the landscape and allowing natural disturbances such as windthrow to create the complex structure that creates habitat for late-successional species.

For a full list of references used to create this description, please refer to the natural community abstract for Rich Conifer Swamp.