Patterned fen is a minerotrophic shrub- and herb-dominated peatland mosaic characterized by a series of peat ridges (strings) and hollows (flarks) oriented parallel to the slope of the landform and perpendicular to the flow of groundwater. The strings vary in height, width, and spacing, but are generally less than one meter tall, resulting in a faint wave-like pattern that may be discernable only from aerial photographs. The flarks are saturated to inundated open lawns of sphagnum mosses, sedges, and rushes, while the strings are dominated by sedges, shrubs, and scattered, stunted trees. Patterned fens occur in the eastern Upper Peninsula, with the highest concentration found in Schoolcraft County. Patterned fens are also referred to as patterned bogs, patterned peatlands, strangmoor, aapamires, and string bogs. 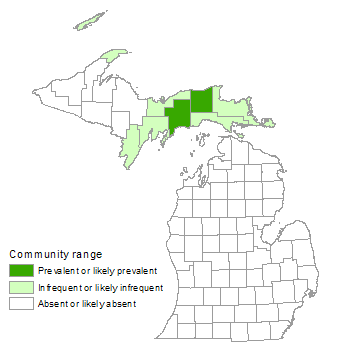 Patterned fens are prominent features in the boreal and sub-boreal regions of North America, Europe, and Siberia. This natural community reaches its southern extent in the Great Lakes States of Minnesota, Wisconsin, and Michigan. Fourteen high-quality patterned fens, totaling approximately 34,000 acres, have been documented in the eastern Upper Peninsula in Alger, Chippewa, Delta, Luce, Mackinac, and Schoolcraft Counties.

Peat (including fibric, hemic, and sapric peat) forms the substrate for both the strings and flarks of patterned fen communities. Peat can be several meters deep (10 to 25 feet for Lake Agassiz peatlands of Minnesota) and is derived from sedges, sphagnum mosses, reeds, and moderately decomposed woody material. The saturated peat ranges from medium acid to circumneutral. The flarks tend to be wetter, slightly acidic to circumneutral, and more minerotrophic than the strings, although nutrient availability and pH can differ greatly both within and among patterned peatland systems. The amount of water in the flarks also varies depending on local hydrology, precipitation, and season.

Given the level to gently sloping topography of patterned fens, peat formation and expansion are primarily the result of paludification, the encroachment of sphagnum mosses into adjacent terrestrial systems. The sphagnum mosses responsible for paludification may have originated from nearby peat-filled lake basins or other peat-accumulating depressional wetlands.

Several hypotheses have been proposed to explain the subtle dynamics responsible for the patterning within patterned fens. Most researchers agree that the direction of water movement is an essential factor as the strings and flarks are consistently oriented perpendicular to the direction of water flow. Early research suggested that strings and flarks are a result of permafrost and frost action, but patterned peatlands have since been documented in northern Michigan, Minnesota, and southern Wisconsin, where permafrost is absent. Another hypothesis to explain the origin of strings and flarks is the gradual down-slope slipping of peat. In this hypothesis, peat moves downslope until the advancing soil catches on a subsurface irregularity, such as a rock or tree, and stabilizes to form a string, eventually creating a patterning effect across the peatland. Others suggest that the string and flark patterning is the result of gradual expansion and merger of hollows created in sedge hummock-hollow microtopography within the peatland. This process is thought to be controlled by differential rates of peat accumulation and enhanced by active peat degradation within the hollows. Further research is needed to completely understand the complex biotic, chemical, and physical interactions occurring within patterned fens. Additional research on the fire regimes of patterned fens is warranted. During drought years, fire is an important disturbance factor influencing the species composition and structure of patterned fen and also potentially impacting the patterning.

A major threat to patterned fen is hydrologic alteration through ditching, damming, logging, and trail- and road-building activities, which can result in significant changes to peatland composition and structure. Peat mining also threatens pristine peatland systems. Effective conservation of patterned peatlands should include protecting and/or restoring the natural hydrology of the peatland and surrounding watershed.

Vegetation and patterning can vary significantly within and among patterned fens and is influenced by groundwater flow and past disturbances events such as fire and flooding.

For a full list of references used to create this description, please refer to the natural community abstract for Patterned Fen.