Intermittent wetland is a sedge- and herb-dominated wetland found along lakeshores or in depressions and characterized by fluctuating water levels, both seasonally and interannually. Intermittent wetlands exhibit traits of both peatlands and marshes, with characteristic vegetation including sedges (Carex spp.), rushes (Juncus spp.), sphagnum mosses, and ericaceous shrubs. The community occurs statewide. 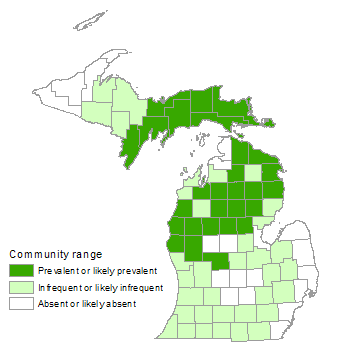 The sandy soils underlying intermittent wetlands are strongly to very strongly acidic and are primarily sands or occasionally loamy sands. Shallow organic deposits of peat or sandy peat may overlay the sandy substrate and in some basins, a clay layer may occur below the surface.

Water level fluctuations occur both seasonally and yearly within intermittent wetlands. Seasonally, water levels tend to be highest during the winter and spring and lowest in late summer and fall. The yearly oscillations are less predictable. Fluctuations of water level within intermittent wetlands allow for temporal variability of the accumulation and decomposition of organic matter. Stable periods of saturated and inundated conditions inhibit organic matter decomposition and allow for the accumulation of peat. Dam-building activities of beaver can result in blocked drainage and flooding, which facilitate sphagnum peat development and expansion. High decomposition rates within intermittent wetlands are correlated with periods of water level fluctuation, which promote oxidation and the loss of organic material that would otherwise form peat.

Water level fluctuation in intermittent wetlands facilitates seed germination and seed dispersal, and reduces competition from woody plants. Seasonal drawdowns are critical to the survival of many intermittent wetland species, especially annuals, which readily germinate from the exposed, saturated soils. Seasonal water level fluctuation also acts as an important mechanism for seed dispersal. During the winter and spring when water levels rise, seeds deposited along the low-water line float to the surface and are carried by wave action to the wetland’s outer margin. In addition, high water levels can limit tree and shrub encroachment into intermittent wetlands since prolonged flooding can result in tree and shrub mortality.

Fire is also an important component of the natural disturbance regime of intermittent wetlands. Intermittent wetlands typically occur as small depressions within a fire-dependent landscape and would have likely experienced surface fires along with the surrounding uplands when conditions were favorable. Surface fire can contribute to the maintenance of open conditions by killing encroaching trees and shrubs. In the absence of fire, a thick layer of leaf litter can develop that stifles seed germination and seedling establishment. Fire severity and frequency in intermittent wetlands is closely related to fluctuations in water level. Prolonged periods of lowered water table can allow the vegetation and surface peat to dry out sufficiently to burn. When the surface peat of intermittent wetlands burns, the fire mineralizes the peat, and kills seeds and latent buds of some species while stimulating seed germination and stem sprouting of others. Peat fires likely convert bogs to more graminoid-dominated peatlands such as intermittent wetlands, poor fens, and northern wet meadow. Because fire has been shown to increase seed germination, enhance seedling establishment, and bolster flowering, fire likely acts as an important mechanism for maintaining plant species diversity and replenishing the seed banks of intermittent wetlands.

Intermittent wetland is a sedge- and herb-dominated wetland. In many locations, the community borders or encompasses a bog mat that supports sphagnum mosses, low ericaceous, evergreen shrubs, and widely scattered and stunted conifer trees. The flora of intermittent wetlands is characteristically dominated by monocotyledons, with annual species contributing significantly to overall species diversity. For the majority of species, flowering and seed set occur in late summer and fall, when water levels are lowest. However, species with bog affinities found on bog mats within these wetlands tend to be spring-flowering.

Beaver (Castor canadensis) and muskrat (Ondatra zibethicus) can profoundly influence the hydrology of intermittent wetlands. Muskrats create open water channels through peat, and beavers can cause substantial flooding through their dam-building activities.

Protection of the regional and local hydrologic regime is critical to the preservation of intermittent wetlands. Stabilization of water levels can allow for the establishment of perennials and woody species, which can displace less competitive annuals. Increased surface flow and alteration of groundwater recharge can be prevented by avoiding road construction and complete canopy removal in adjacent stands. A serious threat to intermittent wetland hydrology and species diversity is posed by off-road vehicle (ORV) traffic, which can significantly alter the hydrology through rutting and erosion. Soil erosion resulting from ORV use within the wetland or surrounding uplands may greatly disturb the seed bank, reducing plant density and diversity. Reduction of access to wetland systems will help decrease detrimental impacts from ORVs.

Where shrub and tree encroachment threatens to convert open wetlands to shrub-dominated systems or forested swamps, prescribed fire can be employed to maintain open conditions. Prescribed fires are best employed in intermittent wetlands during droughts or in the late summer and fall when water levels are lowest. In addition to controlling woody invasion, fire promotes seed bank expression and rejuvenation and thus helps maintain species diversity. Intermittent wetlands are common natural features within a variety of droughty, fire-dependent, upland pine and oak matrix communities and would likely have experienced surface fires along with the surrounding uplands when conditions were favorable. When feasible, prescribed fires conducted in the adjacent uplands should be allowed to carry into intermittent wetlands.

For a full list of references used to create this description, please refer to the natural community abstract for Intermittent Wetland.