Prairie fen is a wetland community dominated by sedges, grasses, and other graminoids that occurs on moderately alkaline organic soil and marl south of the climatic tension zone in southern Lower Michigan. Prairie fens occur where cold, calcareous, groundwater-fed springs reach the surface. The flow rate and volume of groundwater through a fen strongly influence vegetation patterning; thus, the community typically contains multiple, distinct zones of vegetation, some of which contain prairie grasses and forbs. 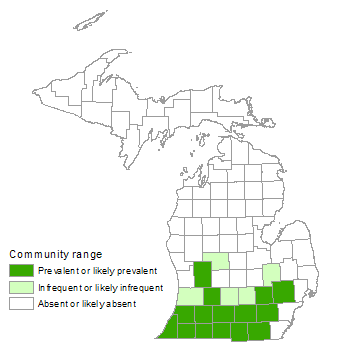 Prairie fens occur predominantly within poorly drained outwash channels and outwash plains in the interlobate regions of southern Lower Michigan. This area is comprised of coarse-textured end moraines and ice-contact features (eskers and kames) that are bordered by glacial outwash. Prairie fen often occurs where an outwash feature (channel or plain) abuts a coarse-textured end moraine or ice-contact feature.

Prairie fens typically occur as part of large wetland complexes that support a variety of wetland communities including emergent marsh, southern wet meadow, wet prairie, wet-mesic prairie, southern shrub-carr, and rich tamarack swamp. The community is frequently found along both small lakes and the upper reaches of streams and rivers.

Prairie fen occurs on saturated organic soil and marl, a calcium carbonate (CaCO3) precipitate. Marl deposits can accumulate to depths greater than one meter in lakes and shallow calcareous water as a result of metabolism by algae. The organic soils are typically mildly alkaline, with marl deposits reaching slightly higher levels of alkalinity. The soil profile of prairie fens often contains distinct zones of sedge peat, woody peat, and marl. Thus, the organic deposits may change with depth throughout the soil profile from fibric peat to hemic peat or well-decomposed sapric peat (muck) depending on a fen’s successional history and past disturbance regime. The white- to grayish-colored marl may be present as discrete, sometimes thick, bands within the soil profile or at the surface, where it may occupy small pools surrounding groundwater springs, or cover extensive portions of a fen.

The groundwater that supports the hydrology of prairie fens is rich in calcium and magnesium carbonates, which are absorbed from the calcareous sand and gravel substrates of the surrounding glacial deposits. Prairie fens occur where cold, calcareous groundwater flows through the community’s organic soil and reaches the surface in the form of perennial springs and seeps. The constant flow of groundwater from springs and seeps can result in the formation of small rivulets that join to form headwater streams, or sheet flows that cover the soil surface with a thin layer of moving water. The substrate around springs and under areas of sheet flow is typically marl, which forms as a result of the metabolic activity of algae growing in water rich in calcium and magnesium carbonates (i.e., hard water). A steady flow of cold, calcareous groundwater also flows beneath the surface through the organic soil of prairie fens. Because the soils remain saturated throughout the year, aerobic bacteria that break down plant materials are much reduced, resulting in the buildup of partially decayed plant debris or peat. The buildup of organic matter around springs and seeps allows some prairie fen complexes to support both areas of “domed fen,” which appear as broad, round hills comprised of organic soils in the middle of the wetland, and “hanging fen,” which occur as low-gradient slopes of organic soil that can span from the upland edge across the wetland to meet level vegetation zones such as sedge meadow or marl flat. Both the domed fen and hanging fen can puzzle observers who are not accustomed to seeing wetlands occurring as hills and sloping terrains. In some locations, the large volume of water underlying prairie fens creates a quaking mat or floating mat, which shakes and reverberates with each step. Quaking mats are especially common where prairie fens occupy former lake basins that have filled with marl or peat. These “basin fens” may occupy the entire basin of an abandoned glacial lake or occupy portions of a basin along the shores of existing lakes.

Historically, fires moving across oak savanna (i.e., oak barrens and oak openings) routinely carried into bordering prairie fens. Most plants found within prairie fens are well adapted to fire. By consuming dried leaves from the previous growing season, fire increases the availability of important plant nutrients and reduces the thickness of the duff layer. The resulting reduction in litter allows light to reach the soil surface where it stimulates seed germination. Fire also facilitates seedling establishment by reducing competition from robust perennials, especially during the early growing season. The increased nutrient availability contributes to enhanced growth and bolsters flowering and seed set. By killing or top-killing shrubs and trees, fires help maintain the open and semi-open structure on which many of the community’s plants and animals depend. In summary, fire is an important ecological process for prairie fen as it facilitates nutrient cycling, seed bank expression and maintenance, and helps maintain community structure.

Historically, flooding resulting from beaver dams was very likely a common occurrence in the level and lower-elevation portions of prairie fen complexes. Prolonged flooding can kill trees, shrubs, and many herbaceous plants and results in conversion of prairie fen to shallow ponds, emergent marsh, or southern wet meadow.

The wooded fen zone represents portions of the fen that are slowly succeeding to closed-canopy communities such as southern shrub-carr and rich tamarack swamp in the absence of management or natural disturbance. Many of the herbaceous species from the other vegetation zones also occur within wooded fen. Woody species occurring in this zone include poison sumac, bog birch, tamarack, silky dogwood (Cornus amomum), gray dogwood (C. foemina), red-osier dogwood (C. sericea), winterberry (Ilex verticillata), ninebark (Physocarpus opulifolius), nannyberry (Viburnum lentago), yellow birch (Betula alleghaniensis), red maple (Acer rubrum), and American elm (Ulmus americana). The wooded fen zone in most of the remaining prairie fens occupies a significantly greater area today than in the past due to the absence of fire and beaver flooding.

Ant mounds reaching more than half a meter in height and one meter in width are a common feature within the sedge meadow zone and where woody species have recently colonized open fen.

Today, most prairie fens are significantly reduced in size as a result of shrub and tree establishment. In addition, the surrounding uplands have also changed from open, oak savanna or woodland, to closed-canopy forest. Historically, the principal natural process that maintained the open structure of these upland and wetland communities was fire. Thus, reintroducing fire through prescription burning of prairie fens and adjacent upland oak forests is a critical management need. Because of the small and fragmented condition of many of our remaining prairie fens, use of prescribed fire as a management tool should include setting aside significant portions of fen to remain unburned in any given year to help lessen impacts to fire-sensitive species. Streams, rivers, lakes, and wet lines created by hoses can serve as fire breaks for establishing unburned refugia within a prairie fen.

In addition to prescribed fire, reducing the density of trees and shrubs also typically requires the use of herbicides, which can be applied to the recently cut stumps of woody plants. Cutting woody plants without applying herbicides is typically ineffective at reducing shrub and tree density because the plants resprout and grow rapidly from well developed root stocks.

Because of their proximity to the range of prairie in North America, prairie fens occurring in far southwestern Lower Michigan generally have a greater abundance and diversity of species associated with prairies than those located farther north and east.

Prairie fens can differ significantly in appearance from one another based on amount of groundwater input and water chemistry, disturbance history, proximity to streams or lakes, and position related to local landforms (outwash channels, moraines, etc.). Fens with extensive marl flats often develop on former glacial lakebeds (i.e., basin fens) and contain low, acidic peat mounds that support species associated with bogs. Domed fens occur where the buildup of organic soils around groundwater discharge areas has resulted in the creation of a large, low broad hill within the wetland. The broad peat domes usually support low vegetation associated with the sedge meadow zone. Hanging fens are often associated with the edges of moraines, eskers, and kames and appear as low gradient slopes along the edges of the upland. Hanging fens typically slope from the edges of the upland to level marl flats or stream channels and support low vegetation associated with the sedge meadow zone. Quaking mats are common features of prairie fens and are typically associated with springs, the edges of lakes, or basins of former glacial lakes that have filled with peat (i.e., basin fens). Quaking mats form as fen sedges creep out into open water or emergent or submergent marshes along the edges of lakes. Vegetation is typically low and dominated by sedges.

For a full list of references used to create this description, please refer to the natural community abstract for Prairie Fen.