Muskeg is a nutrient-poor peatland characterized by acidic, saturated peat, and scattered or clumped, stunted conifer trees set in a matrix of sphagnum mosses and ericaceous shrubs. Black spruce (Picea mariana) and tamarack (Larix laricina) are typically the most prevalent tree species. The community primarily occurs in large depressions on glacial outwash and sandy glacial lakeplains. Fire occurs naturally during periods of drought and can alter the hydrology, mat surface, and floristic composition of muskegs. Windthrow, beaver flooding, and insect defoliation are also important disturbance factors that influence species composition and structure. 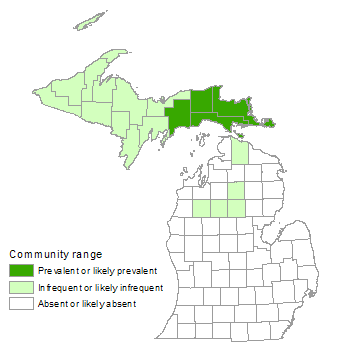 Muskegs primarily occur on broad, flat areas or mild depressions of glacial outwash and glacial lakeplains but can also be found in large depressions on pitted outwash and moraines. Peatlands occurring on former glacial lakebeds and drainageways tend to be more extensive than kettle peatlands, which are limited in area by the size of the glacial ice-block that formed the basin. Muskegs within large wetland complexes typically occur adjacent to other peatland communities, often grading into bog, patterned fen, poor fen, poor conifer swamp, and/or rich conifer swamp. More minerotrophic systems such as northern fen, northern shrub thicket, northern wet meadow, rich conifer swamp, and hardwood-conifer swamp can occur along the outer margins of muskegs where groundwater seepage from the adjacent uplands is prevalent. Muskegs frequently occur adjacent to lakes and meandering streams (usually less than third order), which often weave along the margins of muskegs and through the adjoining minerotrophic wetlands. Upland community types that often occur adjacent to muskegs include dry northern forest, dry-mesic northern forest, and mesic northern forest. Sandy ridges dominated by white pine, red pine, and/or jack pine often occur within peatland complexes, especially in the eastern Upper Peninsula where these low ridges represent former transverse dunes.

The organic soils of muskegs are composed of peat, which forms a continuous mat ranging in thickness from one to eight meters but is typically one to three meters deep and overlays sand. The depth of peat and soil moisture increases with peatland age and can vary within a site. Peat depth is typically greatest near the center of a peatland and decreases toward the margin or in areas with groundwater influence. The rooting zone within muskegs is quite shallow, typically confined to the uppermost 15 cm of the surface peat, where there is sufficient oxygen to maintain aerobic respiration. The surface peats of muskegs are dominated by saturated fibric peat, which is loosely compacted and spongy, contains partially decomposed sphagnum moss with fragments of wood and occasionally sedge, and like the surface water, is extremely acidic, cool, and characterized by low nutrient availability and low oxygen levels. Peat composition changes with depth and varies with the successional history of a given peatland. Generally, fiber content and hydraulic conductivity decrease with depth. Deep humidified peats can effectively seal basins and create a perched water table.

Muskegs are ombrotrophic to weakly minerotrophic peatlands, receiving inputs of water and nutrients primarily from ion-poor precipitation. Saturated and inundated conditions inhibit organic matter decomposition and allow for the accumulation of peat. Under cool, anaerobic, and acidic conditions, the rate of organic matter accumulation exceeds organic decay. Once sphagnum mosses become established on the peat mat, they maintain and enhance saturated, acidic, and cool conditions, which in turn promote continued peat development.

Development and expansion of peatlands occur via two distinct processes: lake-filling and paludification. Lake-filling occurs in small lakes with minimal wave action, where gradual peat accumulation results in the development of a peat mat that can fill the basin or occur as a floating mat or grounded mat. Paludification is the blanketing of terrestrial systems (often forests) by the overgrowth of sphagnum mosses and peatland vegetation. Paludified peatlands typically develop on flat areas, especially lakeplains, where peat builds vertically and spreads horizontally. The lateral expansion of peatland into forested systems can lead to the conversion to muskeg since thick sphagnum mats can limit tree establishment and growth. For both lake-filling and paludification, peat accumulates above the water table and the peatland becomes isolated from the influence of groundwater.

Once established, muskeg can persist for hundreds of years given stable hydraulic conditions and the lack of fire, which can burn the canopy and organic soils. Fire, which is an infrequent but important disturbance factor within peatlands, controls plant population dynamics by initiating and terminating succession. Estimates of fire return intervals for forested peatlands range widely from over a hundred to several hundred years in fire-prone landscapes to several hundred to over a thousand years for muskegs embedded within fire-protected landscapes. Fire severity and frequency in muskegs are closely related to climatic change and fluctuations in water level. Prolonged periods of drought and lowered water table can allow the surface peat to dry out sufficiently to burn, killing existing vegetation and occasionally exposing mineral soil. Low-severity surface fires in open peatlands can contribute to their maintenance by killing encroaching trees, promoting sprouting of ericaceous shrubs, and minimally impacting sphagnum moss cover.

Changes in the water and nutrient regimes of peatlands result in significant modification of species composition and abundance. Beaver, through their dam-building activities, can cause substantial hydrologic change to peatland systems, causing either flooding or the lowering of the water table depending on the location of the peatland in relation to the dam. Behind a beaver dam the water table is higher, while below it, drier conditions are generated. Short periods of flooding can cause needle chlorosis, necrotic needle tips, and decreased shoot and root growth of swamp conifers due to low oxygen concentration and nutrient availability in the rooting medium from water logging. Prolonged flooding of poor conifer swamps can result in the death of the canopy trees and the conversion to muskegs and bogs or even open systems dominated by marsh and fen vegetation. The lowering of the water table through beaver damming or climatic changes can result in the conversion of open peatlands to northern shrub thicket or poor conifer swamp.

Tree survival in muskegs is limited by windthrow, insects, and parasites. Trees growing in muskeg are particularly susceptible to windthrow because saturated sphagnum peat provides a poor substrate for anchoring trees. Small-scale wind disturbance, along with insect herbivory, contributes to the structural diversity of muskegs by generating moderate pit and mound microtopography, standing snags, and coarse woody debris that is quickly enveloped by sphagnum mosses. The plant parasite dwarf mistletoe (Arceuthobium pusillum) can increase the mortality of black spruce. Three insect defoliators are prevalent in peatlands: larch sawfly (Pristophora erichsonii), larch casebearer (Coleophora laricella), and spruce budworm (Choristoneura fumiferana). Spruce budworm defoliates both black spruce and balsam fir (Abies balsamea) but tends to be more detrimental to the latter. Tamarack growing in peatlands often suffers from repeated defoliation by larch sawfly. Although a more recent arrival in Michigan, the larch casebearer is beginning to cause heavy defoliation to tamarack, especially in the eastern and central Upper Peninsula.

In general, the population of animals is low in muskegs because of the low productivity of peatland plants, unpalatability of the vegetation, and high acidity of the peat. Bogs and muskegs provide important habitat for small mammals such as short-tailed shrew (Blarina brevicauda), beaver (Castor canadensis), meadow vole (Microtus pennsylvanicus), mink (Mustela vison), muskrat (Ondatra zibethicus), and masked shrew (Sorex cinereus). Both muskrats and beaver can profoundly influence the hydrology of open peatlands. Muskrats create open water channels through the peat and beavers can cause substantial flooding through their dam-building activities.

The primary mechanism for preserving muskegs is to maintain their hydrology. A serious threat to muskeg hydrology is posed by off-road vehicle traffic, which can significantly alter hydrology through rutting. Reducing access to peatland systems will help decrease detrimental impacts. Avoiding the construction of new roads that traverse peatlands will help prevent unintended hydrologic alteration. The installation and maintenance of culverts under roads passing through peatlands can avert flooding and drying. Resource managers operating in uplands and forested peatlands adjacent to muskegs should take care to minimize the impacts of management to hydrologic regimes, especially increased surface flow. This can be accomplished by establishing a no-cut buffer around muskegs and avoiding road construction and complete canopy removal in stands immediately adjacent to muskegs.

Anthropogenic disturbance has decreased the extent of peatlands and dramatically altered many occurrences. Turn-of-the-century logging of tamarack, black spruce, and cedar from peatland systems favored the conversion of forested peatlands to open, ombrotrophic bogs and muskegs. Historically, widespread slash fires followed logging, converting poor conifer swamp to open bogs or muskegs or destroying the peat and converting peatlands to mineral soil wetlands. Beginning in the 1920s, effective fire control reduced the acreage of fires ignited by humans or lightning. In landscapes where frequent fire was the prevalent disturbance factor, fire suppression has led to the conversion of open bogs and muskegs to closed-canopy peatlands and the maintenance of closed-canopy poor conifer swamps. Peat mining and cranberry farming have degraded numerous peatlands throughout the region. In addition to direct impacts to vegetation, alteration of peatland hydrology from road building, creation of drainage ditches and dams, and runoff from logging and agriculture has led to significant changes in peatland composition and structure.

Peatland vegetation is extremely sensitive to minor changes in water levels and chemistry. Succession to more minerotrophic wetlands can occur as the result of increased alkalinity and raised water levels, which can cause the increased decomposition of acidic peats. Flooding of muskegs and poor conifer swamps can cause the death of canopy trees and the conversion of forested peatland to open wetlands. Flooding of poor conifer swamps can result in the conversion to muskeg. Roads and highways traversing through large peatland complexes, especially in the Upper Peninsula, have caused the blockage of drainage (impoundment of water) and the alteration of muskegs and poor conifer swamps to open peatlands. Conversely, lowering of water tables from drainage can allow for tree and shrub encroachment into open bogs and muskegs and the eventual succession to closed-canopy peatland. The dependence of muskegs on precipitation for nutrients and water makes them especially susceptible to acid rain and air pollution. Atmospheric deposition can contribute nitrogen, sulphur, calcium, and heavy metals to peatlands. Eutrophication from pollution and altered hydrology can detrimentally impact peatlands by generating conditions favorable for invasive plant species. Particularly aggressive invasive species that may threaten the diversity and community structure of muskeg include glossy buckthorn (Frangula alnus), narrow-leaved cat-tail (Typha angustifolia), hybrid cat-tail (Typha xglauca), reed canary grass (Phalaris arundinacea), and reed (Phragmites australis subsp. australis). At present, most of these invasive species appear to be restricted to the margins of muskegs, where they occur in moats or ditches along roads and trails that border the community. Monitoring and control efforts to detect and remove invasive species before they become widespread are critical to the long-term viability of muskeg.

Muskegs occurring on glacial lakeplains and outwash plains tend to be more extensive than those occurring in kettle depressions, which are limited in area by the size of the glacial ice-block that formed the basin.

For a full list of references used to create this description, please refer to the natural community abstract for Muskeg.