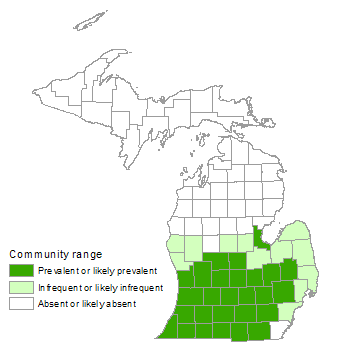 The organic soils underlying rich tamarack swamp are typically comprised of deep (> 2.5 m) peat containing large amounts of woody debris and occasionally layers of sedge-dominated peat. The soil profile often contains or is underlain by marl, a calcium carbonate precipitate that accumulates as sediment in shallow lake bottoms. Because glacial till in southern Michigan is typically high in calcium and magnesium, the groundwater discharge into rich tamarack swamp has high levels of alkalinity and dissolved calcium and magnesium carbonates.

Windthrow, insect outbreak, beaver flooding, and fire are all important forms of natural disturbance for rich tamarack swamp. Trees growing in the anaerobic conditions associated with a high water table and peat soils tend to be shallowly rooted and are thus, especially prone to windthrow. The light gaps created by windthrow help to regenerate tamarack and maintain the community’s dense shrub layer. In addition, the coarse woody debris and pit and mound microtopography that results from windthrow add to the community’s complex structure and floristic diversity.

Periodic outbreaks of larch sawfly (Pristophora erichsonii) and eastern larch beetle (Dendroctonus simplex), both native insect species, and the introduced tamarack casebearer (Coleophora laricella) can cause significant mortality of tamarack. The defoliation associated with an insect outbreak results in increased light reaching the understory, which may promote tamarack regeneration and high shrub-layer density. However, these defoliation events also promote the growth of red maple, which subsequently reduces the amount of light available to the understory and ground layers and results in lower species richness.

Due to the strong influence of groundwater, water levels in rich tamarack swamps tend to fluctuate less than in many other wetland types. However, the community is subject to seasonal water fluctuations and long-term flooding associated with beaver dams or blocked road culverts. Although the roots of tamarack form elevated hummocks that allow it to withstand small-scale water level fluctuations, prolonged flood events result in tamarack mortality and the conversion of rich tamarack swamp to emergent marsh, southern wet meadow, or southern shrub-carr.

While fire is not a frequent form of direct disturbance in rich tamarack swamps, its influence on the surrounding landscape is very important to the successional dynamics of this community. With the widespread absence of fire in southern Michigan, tamarack, a common tree within prairie fens, has completely colonized many sites that were previously occupied by prairie fen, thus forming many of the rich tamarack swamps we see today. Additionally, fire suppression in the surrounding landscape has facilitated the increase and dominance of red maple within upland forests. As a result, red maple is now more likely to colonize rich tamarack swamps and replace tamarack, especially following disturbances such as insect outbreaks and windthrows.

The structure of this community is largely shaped by tamarack, the dominant tree species. The roots of tamarack often form extensive mats that stand elevated above adjacent pools of standing water and provide a substrate for a diverse wetland ground flora that differs from that of the inundated mudflats between root hummocks. The varied microtopography fosters biocomplexity and high species richness. Tamarack windthrows and tip-up mounds also add to the heterogeneous structure of the ground and shrub layers. Because of the open branching and spire-like shape of tamarack, the shrub layer of rich tamarack swamp receives a high level of light and is typically both very dense and diverse. The shrub layer may contain as many as 28 species, with multiple species intertwined and over-topping one another so that total shrub-layer cover may reach 90 to 130%.

Beaver-induced flooding can result in widespread mortality of tamarack and other species not adapted to inundated conditions. Periodic outbreaks of the larch sawfly (Pristophora erichsonii) and tamarack casebearer (Coleophora laricella) result in significant reductions in tamarack-cover, and repeated defoliation events can cause tamarack-mortality. Fall migrating songbirds and other resident birds and small mammals feed on the abundance of fruit produced by the dense shrub layer of rich tamarack swamp.

The presence of conifer-dominated wetlands in southern Michigan contributes significantly to the region’s overall biodiversity. Protecting the hydrology of rich tamarack swamp is critical for its continued existence and may include avoiding surface water inputs to the community from drainage ditches and agricultural fields, clearing blocked road culverts, which can cause prolonged flooding, and maintaining native vegetation types in the uplands surrounding the community.

Invasion by red maple can cause rich tamarack swamp to shift toward hardwood domination, resulting in a significant decrease in shrub-layer cover and loss of shade-intolerant species such as tamarack. Reducing red maple cover in rich tamarack swamps by girdling in conjunction with trunk-application of wetland-approved herbicide may be effective in limiting its dominance. Ideally, this type of management would accompany the use of prescribed fire and removal of red maple in the upland forests adjacent to the swamp as well as hydrologic restoration where necessary. Significantly reducing red maple cover within the swamp and adjacent upland will help ensure that characteristic natural disturbance events, such as windthrow and insect outbreaks, result in tamarack regeneration rather than further proliferation of red maple.

Throughout northern Michigan and near the tension zone in mid-Michigan, northern white-cedar (Thuja occidentalis) replaces tamarack as the dominant tree species in groundwater-influenced, forested wetlands. Rainwater-fed (ombrotrophic) acidic, tamarack and black spruce swamps also occur in southern Michigan and are classified as poor conifer swamp. Many large wetland complexes contain zones of both minerotrophic tamarack swamp (e.g., rich tamarack swamp) near the upland edge where groundwater seeps occur, as well as ombrotrophic tamarack swamp (e.g., poor conifer swamp) near the center of the complex. In the ombrotrophic zone, deep peat separates the vegetation from the influence of groundwater and sphagnum mosses acidify the surface peat.

For a full list of references used to create this description, please refer to the natural community abstract for Rich Tamarack Swamp.