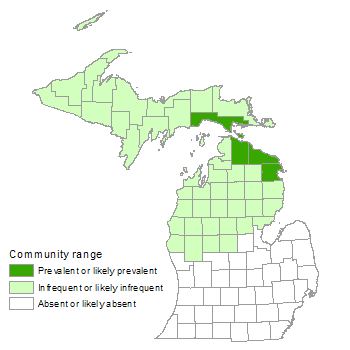 Northern hardwood swamps can be found in diverse landscape settings, including abandoned lakebeds, level to hummocky glacial lakeplains, shallow basins, groundwater seeps, low, level terrain near rivers, lakes, or wetlands, and small depressions around edges of peatlands. The majority of circa 1800 black ash swamps were located on flat lacustrine plains, fine- and medium-textured glacial tills, or broad flat outwash plains. Northern hardwood swamps occur on poorly drained soils and in areas that receive seasonal flooding or have high water tables. Perched saturated pockets and pools of standing water are common features of northern hardwood swamp, especially during spring. Because they occupy depressions, these ecosystems are colder than the immediately surrounding landscape.

Soils are poorly to very poorly drained and often consist of a shallow layer of muck (i.e., sapric peat) overlaying mineral soil. The texture of mineral soils is most commonly fine sandy clay loam to fine loam and an underlying impermeable clay lens is often present.

Seasonal flooding is the primary disturbance in northern hardwood swamps. Standing water, usually a result of groundwater seepages, can reach over 30 cm (12 in) in depth, and is usually present in spring and drained by late summer. Water often pools due to an impermeable clay layer in the soil profile. Overstory species associated with flooding have several adaptations to soil saturation such as hypertrophied lenticels (oversized pores on woody stems that foster gas exchange between plants and the atmosphere), rapid stomatal closure, adventitious roots, and reproductive plasticity. Flooding extent has even been found to dictate the mode of regeneration for black ash. For example, heavy flooding events usually result in vegetative reproduction by stump sprouting, whereas less prolonged flooding fosters sexual reproduction.

Differences in species composition, in particular the distribution of different species of ash, are dependent upon variation in timing, extent, and duration of high water. The relationship between variations in flooding and species composition is demonstrated by the differences between black ash-dominated swamps, and river floodplains where green ash (Fraxinus pennsylvanica) is a more common dominant species. Green ash requires moving, oxygen-rich water characteristic of river floodplains, whereas black ash has adapted to the usually stagnant water with reduced oxygen content associated with swamp depressions. Green ash on river floodplains withstands routine flooding throughout the growing season. Black ash is very tolerant of low oxygen levels found in stagnant swamps, but is intolerant of flooding well into the growing season. Massive dieback of understory and sometimes overstory trees results from extended periods of high water in northern hardwood swamps. An adaptation to this common occurrence is the long dormancy period (up to eight years) of black ash seeds. In northern hardwood swamps, drier periods that allow for exposure of saturated organic soils are essential for regeneration of swamp vegetation. However, because of the high water-retaining capacity of sapric peat, soil moisture within northern hardwood swamp is typically maintained throughout the growing season, unlike the mineral soils of many floodplains, which can experience summer droughts. While xeric stress is harmful to shallow rooting black ash seedlings, green ash commonly withstands periods of low soil moisture on river floodplains. Black ash-dominated northern hardwood swamp communities are therefore restricted to depressions, or low, level terrain near rivers, lakes, or wetlands that experience seasonal flooding but not the more pronounced levels of soil desiccation found in floodplain systems.

Historically, catastrophic disturbances in northern hardwood swamp other than flooding were most likely infrequent. Large-scale windthrow and fire in northern hardwood swamps of Minnesota had a rotation of 370 and 1000 years, respectively. However, small windthrow events are common in these systems due to shallow rooting within muck soils. The uprooting of trees creates pit and mound microtopography that results in fine-scale gradients of soil moisture and soil chemistry. Microtopography is an important driver of vegetation patterns within swamp systems since it provides a diversity of microsites for plant establishment. As floodwater drains, both the residual mucky pools and exposed mounds left by uprooted trees provide unique substrates for a variety of northern hardwood swamp plants. Coarse woody debris, which typically lies above the zone of flooding, remains a continued source of saturated substrate for seed germination and seedling establishment through drier periods.

A common agent in hydrologic change in northern hardwood swamps is beaver. Through dam-building activities, beaver can initiate substantial hydrologic change, either causing prolonged flooding or lowering of the water table depending on the location of the swamp in relation to the dam. Behind a beaver dam the water table is higher, while below it drier conditions are generated. In addition to altering hydrology, beaver can generate canopy gaps within these systems by cutting down trees. Through flooding and herbivory, beaver can cause tree mortality and the conversion of northern hardwood swamp to open wetlands such as northern shrub thicket or northern wet meadow.

Black ash (Fraxinus nigra) is the overwhelming canopy dominant of northern hardwood swamp communities. Canopy associates of black ash include red maple (Acer rubrum), silver maple (A. saccharinum), American elm (Ulmus americana), yellow birch (Betula alleghaniensis), basswood (Tilia americana), balsam fir (Abies balsamea), northern white-cedar (Thuja occidentalis), and green ash (Fraxinus pennsylvanica). However, these species are all found in greater density in other communities. The shrub layer can consist of saplings of overstory species along with winterberry (Ilex verticillata) and tag alder (Alnus incana). Northern hardwood swamps are characterized by a diverse ground flora that is patchy both seasonally and spatially depending on timing, location, and duration of flooding. Sites are often saturated to inundated in spring and following heavy rains, resulting in numerous sparsely vegetated to bare areas in the understory and ground layers. During the late growing season, when seasonal waters draw down, the herbaceous layer is typically dense.

Black ash seeds are an important food source for game birds, songbirds, and small mammals, and the leaves provide browse for deer and moose. Beaver can cause prolonged flooding, which results in widespread mortality of black ash and other species not adapted to such conditions.

Where the primary conservation objective is to maintain biodiversity in northern hardwood swamps, the best management practice is to leave large tracts unharvested and allow natural processes (e.g., flooding, windthrow, and senescence) to operate unhindered. Black ash is a slow growing species and is usually found with small diameters, under 25 cm DBH (10 in), and is therefore of minor commercial value. Black ash is, however, a component of northern Wisconsin and Upper Peninsula Michigan sawtimber production. Clear-cutting black ash swamps can cause the loss of the community type due to the rises in the water table resulting from decreased transpiration following tree removal.

In southern Lower Michigan, the introduction of the emerald ash borer (Agrilus planipennis) has initiated new concern for ecosystems in which ash plays a significant role. The emerald ash borer (EAB), established in southeastern Lower Michigan around 1990, infests and kills all species of ash. Like Dutch elm disease, which has virtually eliminated American elm as a dominant overstory tree of swamp communites, EAB is having a similar effect on southern hardwood swamps and floodplain forests dominated by black or green ash. Outside the main area of infestation in southeastern Michigan, the density and health of ash is relatively robust, which will likely foster the expansion EAB throughout Michigan and into adjacent states and provinces.

Northern hardwood swamps occurring on lakeplains tend to be larger than those found in kettle depressions, which are limited in area by the size of the glacial ice-block that formed the basin.

For a full list of references used to create this description, please refer to the natural community abstract for Northern Hardwood Swamp.