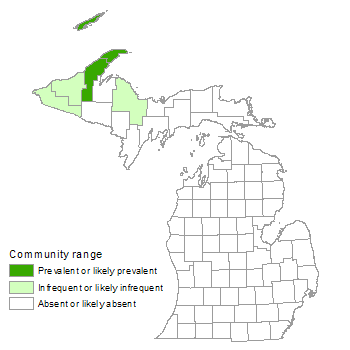 Volcanic cobble shore occurs in the northern Great Lakes region of the United States and Canada, ranging across the Lake Superior shoreline of Michigan, Minnesota, and Ontario. This cobble shore type is derived primarily from the erosion of the Copper Harbor Conglomerates, but includes weathered and eroded sandstone rock derived from other volcanic formations of Precambrian age, including the Portage Lake Volcanics. These shores, which are regularly disturbed by wave action and winter ice movements from the lake, are much steeper than most other cobble beaches encountered on the lower Great Lakes. Most of the shore has little or no vegetation, probably due to regular disturbance by storm waves, which move and reshape the cobble. The highest beach ridge, where scattered shrub vegetation typically establishes, is disturbed only infrequently by the most severe storm waves.

Volcanic cobble shore is typically bordered along its inland edge by boreal forest, dry-mesic northern forest, or mesic northern forest, and occasionally by volcanic bedrock glade. Where streams flow through the community, northern shrub thicket may occasionally border its upper edge. Along the shoreline, volcanic cobble shore is interspersed with areas of volcanic bedrock lakeshore, volcanic lakeshore cliff, and sand and gravel beach.

Little or no soil development occurs on volcanic cobble shore. The few plants that establish probably root in sand and gravel deposits under the cobble, which can be more than a meter in depth. On the Keweenaw Peninsula, the size of the cobbles ranges from 2 to 3 cm (0.75 to 1 in) in diameter to over 20 cm (8 in) in diameter, and large sections of the shoreline consist of similar-sized cobbles. The largest cobbles are located at the extreme east end of the peninsula, where the cobble shoreline is steepest and storm waves the most severe.

Storm waves, erosion by ice-blocks, and desiccation are the primary forms of natural disturbance and act to limit vegetation establishment. Storm waves and ice movement can rearrange cobble shore, form and remove terraces, and uproot and bury plants. Plant establishment in deep cobble is limited by desiccating conditions from full exposure to sun and wind and a lack of moisture during summer droughts. Groundwater seepage, storm waves, and streams, both perennial and intermittent, provide a source of moisture for vegetation in some areas of the community during dry periods. Windthrow is common along the forested edge due to strong winds associated with Lake Superior storms.

Community structure and species composition are influenced by the size and type of pebbles or cobbles, steepness of shoreline slope, and presence or absence of terracing, groundwater seepage, and streams.