Sand and gravel beaches occur along the shorelines of the Great Lakes and on some of Michigan’s larger freshwater lakes, where wind, waves, and winter ice cause the shoreline to be too unstable to support aquatic vegetation. Because of the high levels of disturbance, these beaches are typically quite open, with sand and gravel sediments and little or no vegetation. 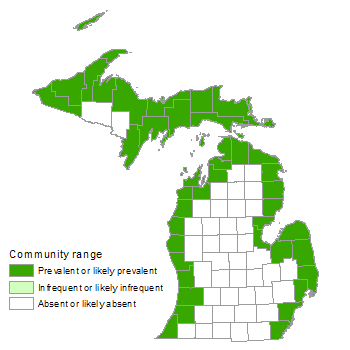 All Sand and Gravel Beach Photos

Sand and gravel beaches occur along the shorelines of the Great Lakes and on some of Michigan’s larger freshwater lakes, where the energy from waves and ice abrasion are adequate to maintain an open beach. Natural communities occurring adjacent to sand and gravel beach include open dunes, interdunal wetlands, wooded dune and swale complex, cobble shore, bedrock lakeshore, and lakeshore cliffs.

The dynamic nature of open sand and gravel beaches greatly inhibits soil development. Uprooted trees accumulate on some beaches, fostering localized sand accretion and often vegetation establishment. Finer organic material also builds up seasonally on beaches, and can include plant debris, algae, and dead lake or wetland organisms such as insects, fish, and zebra mussels (Dreissena polymorpha), a small invasive bivalve mussel. These aggregations can be large, greatly increasing the nutrient availability and changing the sediment characteristics of the beach, although these changes are often temporary due to the dynamics of the shoreline environment. Storm waves and winter ice typically prevent permanent vegetation establishment and soil development. Where organic sediments are protected from erosive forces, vegetation can establish, stabilize the shoreline, and thus eliminate portions of the open beach.

The openness of beach vegetation is the result of the unstable sediment conditions caused by wind, waves, and winter ice. Beaches tend to accumulate sand during less windy spring and summer periods, and lose sand through erosion during strong fall and winter storms. Gravel movement along the shoreline is generated completely by wave or ice movement, while sand can also be moved by wind after its deposition on the beach, often leading to dune development farther inland. While many species of plants are able to establish on sand or gravel beaches, the extreme conditions of desiccation and erosion allow few species to reach maturity and set seed. Severity of desiccation increases as particle size increases, but on many gravel beaches vegetation can establish because finer particles of sand are trapped among the gravel. On sand beaches, successful vegetation establishment causes an increase in surface roughness, slowing both the wind and movement of sand, and resulting in the accumulation of sand in the form of coastal dunes. Vegetation cover increases with distance from the water’s edge due to decreasing levels of erosive wind and water energy. Because water levels fluctuate on many lakes, vegetation cover can increase during periods of low water. Sand beaches regularly migrate with changing water levels and shoreline configuration.

Sand and gravel beach is characterized by both a low diversity of plant species and low levels of plant cover. A wide variety of plants can develop at the inland margin of sand and gravel beaches, but few establish and persist on the active beach, where there is often intense wind and wave action, resulting in almost constantly moving sand. Among the few species able to survive the dynamic beach zone are sea rocket (Cakile edentula), seaside spurge (Euphorbia polygonifolia), Baltic rush (Juncus balticus), silverweed (Potentilla anserina), beach pea (Lathyrus japonicus), and marram grass (Ammophila breviligulata). The rare Great Lakes endemic Pitcher’s thistle (Cirsium pitcheri, federal/state threatened) occasionally establishes on active sand beaches during low-water periods. The community typically contains a zone of open sand along the water’s edge, with only scattered stems of the above-mentioned species. Farther from the water, marram grass is able to stabilize the sand with its extensive roots and rhizomes, allowing for the accumulation of sand into a beach ridge above the zone of active waves. Many more plant species can survive in this zone of sand accumulation, including many herbs, shrubs, and tree seedlings and saplings.

Sand beaches are favorite feeding grounds for shorebirds. Insects, birds, and other fauna feed intensively on dead and decomposing organic materials that accumulate along the shoreline. Large numbers of aquatic insects, such as midges, live in the sediments and provide important food for migratory songbirds during spring migration. In addition, butterflies often gather on the beach for moisture and nutrients during migration. Gravel beaches, especially on islands, are used by nesting gulls, terns, cormorants, and other waterbirds.

Off-road vehicles can destabilize beach areas, especially those areas farther from the shore where vegetation is becoming stabilized. Eliminating illegal off-road vehicle activity is a primary means of protecting the ecological integrity of sand and gravel beaches. Raccoons and unleashed dogs are a major threat to piping plovers, and high levels of human visitation to plover beaches can also result in low breeding success. Many parks actively maintain open beach conditions by mechanical grooming, eliminating the natural flora and fauna of the beach.

There is considerable variability in sand and gravel, based on the rock from which the sands and gravels formed. In portions of the Keweenaw Peninsula, sand-sized mine wastes form broad beaches of dark sand, especially along the Portage Shipping Canal, but because of their anthropogenic origin, these areas are not considered a natural community.

For a full list of references used to create this description, please refer to the natural community abstract for Sand and Gravel Beach.