Alvar is a grass- and sedge-dominated community, with scattered shrubs and sometimes trees. The community occurs on broad, flat expanses of calcareous bedrock (limestone or dolostone) covered by a thin veneer of mineral soil, often less than 25 cm deep. Alvars are only known from three areas of the world: the Baltic region of northern Europe, Counties Clare and Galway of northwest Ireland, and the Great Lakes region south of the Canadian Shield. In Michigan, most of the sites occur in the Upper Peninsula along the shorelines of Lake Huron and Lake Michigan, in a band from Drummond Island to Cedarville, west to Seul Choix Point on the Garden Peninsula. Alvar also occurs farther west and inland along the Escanaba River. In the Lower Peninsula, alvar occurs on Thunder Bay Island and along the Lake Huron shoreline near Rogers City, Alpena, and Thompson’s Harbor. The plant community is also referred to as alvar grassland. 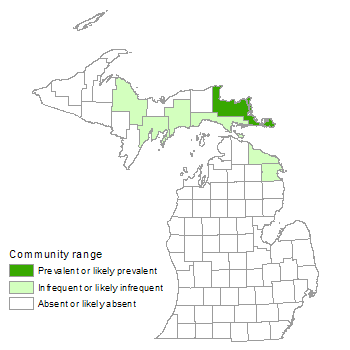 In Michigan, alvar is commonly found near northern Great Lakes shores where flat bedrock pavement is exposed. Bedrock types include both limestone and dolostone of Middle and Late Ordovician and Early Silurian origin (405 to 500 million years ago), when shallow, inland seas covered the Lake Michigan and Lake Huron basins. Much of this limestone has been converted through geological processes to dolomite or dolostone, a magnesium-rich form of limestone. Bedrock of Thunder Bay Island dates to the more recent Devonian period (345 to 405 million years ago). Topography of alvar is flat, and horizontal plates of bedrock are sometimes exposed, giving the impression of, and earning the name, “pavement” or “limestone pavement.”

Alvar soils are characterized by shallow soil over bedrock, with soil depth usually less than 25 cm (10 in). Soil texture is primarily loamy sand or sandy loam. Soil is saturated, or locally inundated in the spring, but becomes droughty later in summer. Thin layers of organic soil may develop in shallow depressions that remain wet for longer periods. Soil is mildly to moderately alkaline.

Alvars are typically subjected to seasonal environmental extremes of soil saturation or inundation in the spring followed by drought in summer. Flooding is less prevalent where there are abundant enlarged cracks (grykes) in the rock, which provide improved internal drainage. The combination of shallow soil and extreme fluctuations in soil-water availability play an important role in controlling the establishment of trees. Historically, fire probably also played an important role in limiting tree establishment and maintaining open grasslands. Where trees do establish, they are typically stunted and windthrow is common due to shallow rooting in the thin soil.

Beaver can cause flooding in long, narrow depressions in the bedrock plain, providing conditions for the establishment of black ash (Fraxinus nigra) swamps. Many species of ants are found living in diverse niches in the bedrock landscape. Black bears feed on the ants and other insects that inhabit alvar.

The historical prevalence of fire in Michigan alvar is not well understood, but these level grasslands likely experienced occasional fires due to lightning strikes and anthropogenic causes. Prescribed fire management to maintain open conditions and species diversity should be implemented and if possible, followed by monitoring to assess changes in species composition and structure.

Limestones and dolomites vary in chemical composition, resistance to erosion, and depth and amount of crevice formation, all factors that affect soil development and plant species composition.

For a full list of references used to create this description, please refer to the natural community abstract for alvar.