Limestone bedrock lakeshore is a sparsely vegetated natural community dominated by lichens, mosses, and herbaceous vegetation. This community, which is also referred to as alvar pavement and limestone pavement lakeshore, occurs along the shorelines of northern Lake Michigan and Lake Huron on broad, flat, horizontally bedded expanses of limestone or dolomite bedrock. On the Lake Michigan shoreline, limestone bedrock lakeshore is concentrated along the Garden Peninsula and the southern part of Schoolcraft County. Along Lake Huron, it is located east of the Les Cheneaux Islands, on Drummond Island, and on Thunder Bay Island. 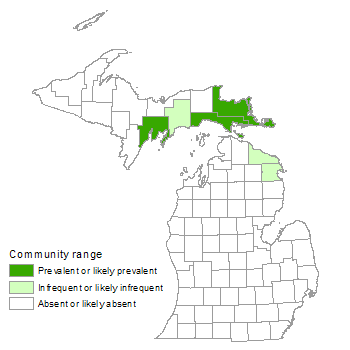 The bedrock includes both limestone and dolomite (or dolostone) of marine origin. Limestone bedrock lakeshores of Michigan occur where flat bedrock of the Niagaran Escarpment is exposed. Bedrock is of Middle and Late Ordovician and Early Silurian origin (405 to 500 million years ago), when shallow, inland seas covered the Lake Michigan Basin. Shoreline bedrock of Thunder Bay Island dates to the more recent Devonian period (345 to 405 million years ago). A veneer of locally derived limestone cobbles of varying thickness occurs along large stretches of limestone bedrock shorelines. Along the inland margins of the limestone pavement, there is often a low ridge of limestone cobble deposited by ice scour and major storm events.

Almost no soil development takes place directly on the limestone pavement, where storm waves and ice routinely scour the rock surface. Consequently, plant establishment is generally limited to cracks, joints, and depressions in the bedrock, where small amounts of organic matter, cobble, and finer sediments accumulate. Because it is formed from marine organisms, limestone bedrock is rich in calcium carbonates, resulting in a mildly alkaline soil pH. Resistance of the bedrock to erosion is variable. Both limestone and dolostone are readily dissolved by rainwater, producing solution depressions and cracks that often connect to the underlying groundwater system. However, limestone rich in mineral soil particles originating from terrestrial sources is resistant to solution and typically contains few cracks.

Limestone bedrock lakeshores are characterized by a zonal gradation of plant communities, changing in response to distance from the lake. The width of the zones varies with Great Lakes water level fluctuations. Wave action and ice scour have their greatest impact closest to the lake. The “splash/scrape zone,” which averages 9 m (30 ft) in width, is very sparsely vegetated. Typical plant species include Baltic rush, silverweed, and balsam poplar. These species get established in cracks where there is some protection from severe ice scour and storm events. Throughout this zone, small pools of standing water are common on the bedrock. Inland from the splash/scrape zone, vegetation density increases as soil accumulates in and around cracks. The “vegetated zone,” which averages 25 m (75 ft) in width, is characterized by patchy establishment of vegetation interspersed with areas of exposed bedrock. Common species include low calamint, shrubby cinquefoil, panic grass, and hair grass, as well as the previously mentioned species from the splash/scrape zone. Farther inland, sand accumulations or “cobble ridges” on the bedrock surface afford a suitable substrate for the establishment of woody plants and denser assemblages of herbaceous plants. Cobble ridges are dominated by scattered shrubs and stunted trees including northern white-cedar, white spruce, and balsam poplar.

Trampling of vegetation and off-road vehicle traffic use can kill or reduce vegetation coverage, destroying the root systems that bind small accumulations of soil to cracks in the bedrock. The removal of lakeshore vegetation facilitates the loss of soil by wind, rain, ice, or wave action, which is especially damaging in this erosive landscape where soil development and plant reestablishment are slow. Eliminating illegal off-road vehicle activity is a primary means of protecting the ecological integrity of limestone bedrock lakeshore and associated shoreline communities.

The composition of the limestone bedrock lakeshore is quite variable and may include areas of sand, silt, or clay minerals, which alter the rock’s resistance to erosion, influence the formation of crevices, and affect hydrologic conditions of the community.

For a full list of references used to create this description, please refer to the natural community abstract for Limestone Bedrock Lakeshore.