Bur oak plains was a fire-dependent, savanna community dominated by oaks, having between 10 and 30% canopy, with or without a shrub layer. The predominantly graminoid ground layer was comprised of species associated with both prairie and forest communities. Bur oak plains were found on mesic loams and typically occurred on level to slightly undulating sandy glacial outwash, and on river terraces. Bur oak plains have been extirpated from Michigan and are now known only from historical literature and data derived from severely disturbed sites. 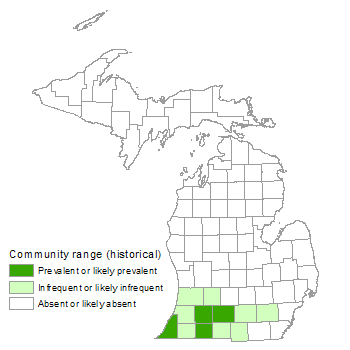 This natural community occurred on level to gently undulating or sloping glacial outwash plains, and also on river terraces, typically on the river’s western side, where fire frequency was highest. Bur oak plains occurred adjacent to more mesic communities, such as mesic prairie and wet-mesic prairie and also graded into the drier savanna and forest types such as oak openings and oak barrens, and dry-mesic southern forest and dry southern forest. Historically, bur oak plains occurred in a complex, shifting mosaic of fire-dependent upland and wetland communities.

Repeated low-intensity fires working in concert with drought and windthrow maintained oak savanna ecosystems. Within mesic savanna systems, such as bur oak plains, it is likely that annual or semi-annual fires were the primary factor influencing savanna structure and composition. Fires prevented canopy closure and the dominance of woody vegetation. Bur oak plains were found primarily on level to gently rolling topography of outwash plains, a landscape in which fires occurred frequently and spread rapidly and evenly. The rich mesic soils of bur oak plains supported high coverage of grass and forb fuels. The frequent fire regime within these systems explains the canopy dominance of bur oak, which is the most fire resistant of the oaks with its deep roots, capacity to resprout, and thick, corky, insulating bark that prevents cambial damage by surface fires.

Oak savanna and prairie fires occur most often during the spring, late summer, and fall. Flammability peaks in the spring before grass and forb growth resumes and then again in the late summer and autumn after the above-ground biomass dies. Numerous biotic factors influence the patterning of vegetation of oak savannas. In addition to widely distributed overstory trees, savannas are characterized by scattered ant mounds. Mound-building ants play a crucial role in the soil development of prairies and savannas; ants mix and aerate the soil as they build tunnels and bring soil particles and nutrients to the topsoil from the subsoil. Herbivores can limit woody establishment and encroachment. Grasses and forbs help maintain the annual fire regime with their flammable properties. Open canopy conditions are also preserved by the development of a dense herbaceous litter that suspends tree propagules and interferes with the ability of radicles to reach the soil surface. Savanna trees influence vegetative composition by affecting the distribution of nutrients, light, and moisture.

Bur oak plains and surrounding prairie habitat once supported a rich diversity of invertebrates including numerous species of butterflies, skippers, grasshoppers, and locusts. Mound-building ants and numerous grassland birds also thrived in savannas and prairies. The fragmented and degraded status of Midwestern oak savannas and prairies has resulted in the drastic decline of numerous insect and bird species associated with savanna habitats and prairie/savanna host plants. The now extinct passenger pigeon (Ectopistes migratorius) was likely a keystone species in oak ecosystems, roosting in oaks by the thousands.

The prime conservation priority for this globally imperiled community is to survey for restorable remnants. The future existence of all oak savannas in Michigan depends upon active restoration; this is especially true for bur oak plains. If bur oak plains remnants are located, the first management step will be the restoration of savanna physiognomy through prescribed fire and/or selective cutting or girdling. The process of restoring the open canopy conditions and eliminating the understory should be conducted gradually, undertaken over the course of several years. Fire is the single most significant restoration tool. In addition to maintaining open canopy conditions, prescribed fire promotes internal vegetative patchiness and high levels of grass and forb diversity, and deters the encroachment of woody vegetation and invasive non-natives. Numerous studies have indicated that fire intervals of one to three years bolster graminoid dominance, increase overall grass and forb diversity, and remove woody cover of saplings and shrubs.

For a full list of references used to create this description, please refer to the natural community abstract for Bur Oak Plains.