Hillside prairie is a grassland or savanna community that occurs on moderate to steep exposed slopes and crests of hills associated with river valleys, streams, or kettle lakes, surrounded by oak forest or oak savanna. This natural community is almost always found on south- to west-facing slopes, where exposure to sunlight is highest. Soils are typically strongly acid to neutral loamy sand or sandy loam, and often mixed with gravel. Hillside prairie is notable for supporting several state-listed plant species largely restricted to this community type. 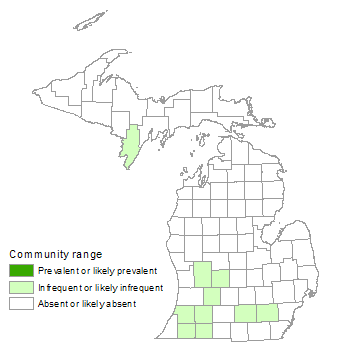 Hillside prairie occurs on steep slopes and crests of hills associated with river valleys, streams, or kettle lakes, surrounded by oak forest (dry southern forest, dry-mesic southern forest, or dry-mesic northern forest) or oak savanna (oak barrens or oak openings). This community almost always occupies south- to west-facing slopes, where exposure to sunlight is highest. It is found primarily in southern Lower Michigan, where occurrences are concentrated in Kent, Kalamazoo, and Jackson Counties. One occurrence is known from the western Upper Peninsula. Due to the specific combination of slope, aspect, and soil type, hillside prairie occurrences are local and of very small size.

Soils are well-drained, sandy loam to loamy sand and can range from strongly acid to neutral. Gravel is often present at or near the surface. One occurrence of hillside prairie is associated with exposed pre-glacial fluvial deposits of shale and conglomerate rocks.

Open conditions of hillside prairie are maintained by fire, droughty soils, steep slopes, and soil erosion. Fire likely played a significant role in maintaining open conditions prior to European settlement based on the dominance of oaks in the surrounding landscape and presence of trails that led through or passed by several hillside prairie sites, suggesting their use as Native American encampments. In addition to preserving open conditions, fire helps maintain species diversity by facilitating seed germination, opening microsites for seedling establishment and growth of small species, and releasing important plant nutrients that bolster plant growth, flowering, and seed set.

Several factors contribute to the droughty conditions of hillside prairie. Steep slopes and sandy soils facilitate rapid drainage. Exposed slopes of southerly to westerly aspect are exposed to high amounts of incident sunlight, which increases soil temperatures and the rate of evapotranspiration at the ground level. Xeric conditions on exposed hillsides and hilltops are further enhanced by the prevailing southwesterly winds, which increase water loss from plants and soils.

Due to the steep slopes of hillside prairie, soil erosion and slumping are common. These processes contribute to maintaining open conditions and species diversity. Seed germination and seedling establishment of several small species may be aided by soil erosion and associated slumping as the bare soil patches provide suitable habitat for low-growing species that would otherwise be eliminated by competition from taller, more robust herbaceous plants.

Hillside prairies and the surrounding oak opening habitat once supported a rich diversity of invertebrates including numerous species of butterflies, skippers, grasshoppers, and locusts. Mound-building ants mix and aerate the soil.

Conservation priorities for hillside prairies include identifying, protecting, and managing existing remnants where they occur. Fire suppression has resulted in conversion of many hillside prairies to closed-canopy forests, and continues to threaten existing sites. Open conditions can be restored through the use of prescribed fire. The initial step of cutting and herbiciding shrubs and trees may be necessary in overgrown sites. The sand and gravel substrate on steep slopes is prone to erosion, so care must be taken to prevent excessive foot traffic and soil disturbance. Invasive species can be controlled with fire, cutting, and herbicide application. Because several rare plants are nearly restricted to this habitat in Michigan, land stewards should take precautions to avoid direct impacts to these species from herbicide or excessive soil disturbance.

Much of our current knowledge of hillside prairie is based on studies of kitten-tails populations in Michigan, Indiana, Illinois, Wisconsin, and Minnesota. Current and historic locations for kitten-tails, side-oats grama, and other indicator species may serve as a guide to the locations of additional, potentially restorable former hillside prairies. Predictive GIS-based models that utilize landscape characteristics associated with the community may also be helpful in finding restorable sites.

The landscape context of hillside prairies on steep, often scenic bluffs overlooking permanent bodies of water has led to the destruction of many remnants due to residential construction.

Middle and lower slopes may support mesic and wet-mesic conditions, respectively. White pine is an important canopy constituent in some occurrences.