A cave is defined as a cavity beneath the earth’s surface, often with an opening to the surface, characterized by little or no light, no primary producers, and biotic communities of one or two trophic levels that import energy from outside the system. Caves are known from the eastern Upper Peninsula, and historically, from southeast Lower Michigan. 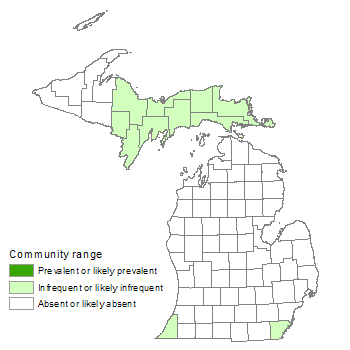 All of Michigan’s caves occur in karst landscapes, where dissolution of limestone or dolomite creates an underground drainage system that can include caves. Michigan’s areas of true karst are limited in extent, but include considerable variety. The Michigan Karst Conservancy owns the 480 acre Fiborn Karst Preserve in Michigan's Upper Peninsula, which includes an extensive and nearly complete karst drainage system with sinkholes, caves, and disappearing streams.

There is no information on soil development within Michigan’s caves, but since they are derived from limestone or dolomite, soils are likely mildly to moderately alkaline.

Caves provide habitat and hibernacula for bats. A small cave in Monroe County, now destroyed, was rumored to have a population of blind crayfish. Little is known about the biology of Michigan's remaining caves, but contrary to the situation in better-known caves of other states, no evidence exists that unusual organisms or groupings of organisms make their homes in them.

In the Upper Peninsula, one large and several small caves have been quarried away. Small caves in Monroe County have also been destroyed. Erosion damage can occur due to uncontrolled foot traffic. Maintaining a forested buffer around caves will help prevent soil erosion and associated runoff into caves.

Caves form from the dissolution of several rock types including limestone, dolomite, and gypsum, which differ in their chemical composition and rates of erosion, and influence cave size and structure.

Please note that Michigan Karst Conservancy preserves are open to the public. However, written permission and appropriate equipment are required for entry into the caves.