Inland salt marsh is an herbaceous wetland occurring on mineral soil saturated by sodium- and chloride-laden groundwater from natural brine aquifers. In Michigan, salt marshes and seeps were concentrated in areas where Silurian or Devonian halites (rock salt deposits) occur near the surface. The only known, intact salt marshes in Michigan today occur along the Maple River in northern Clinton County. Historically, salt marshes were known from elsewhere in Michigan as well as Illinois, Missouri, New York, Ohio, Pennsylvania, and Virginia, but today the community persists only in Illinois, Michigan, and New York. 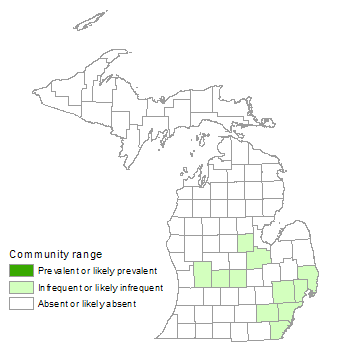 Inland salt marshes are most common along streams or rivers, where glacial drift is thin enough to permit brine from deep saline aquifers to remain concentrated and emerge at discrete points.

This community occurs on peat, muck, or mineral soils saturated by sodium- or chlorine-rich groundwater seeping from saline aquifers. Soils of an intact salt marsh in Michigan were found to be high in sodium, chloride, potassium, calcium, and magnesium and have a pH that ranged from medium acid to moderately alkaline.

Inland salt marshes often have open, unvegetated seeps and soil patches, where conditions are too extreme for plants to grow. Animals seeking salt create localized disturbances resulting in trampled, unvegetated zones within the wetland. Seasonal and annual fluctuations in the amount of seepage in salt marshes influence species composition, distribution, and establishment. Historically, fire may have also played a role in maintaining the open conditions required by most plant species found in salt marshes.

Deer tracks are abundant around inland salt marsh occurrences, and the species may be helping to maintain open conditions. Waterfowl may play a role in the introduction and dispersal of halophytes and other wetland plants.

As salt was an important food preservative during European settlement of the Midwest, most salt marshes and seeps were heavily exploited. Conservation efforts should focus on protecting, managing, and researching existing inland salt marshes. Protection of inland salt marshes will require preserving the hydrologic integrity of the surrounding watershed. Further research on the role of fire in inland salt marshes is needed, as are detailed invertebrate and herptile surveys.

For a full list of references used to create this description, please refer to the natural community abstract for Inland Salt Marsh.